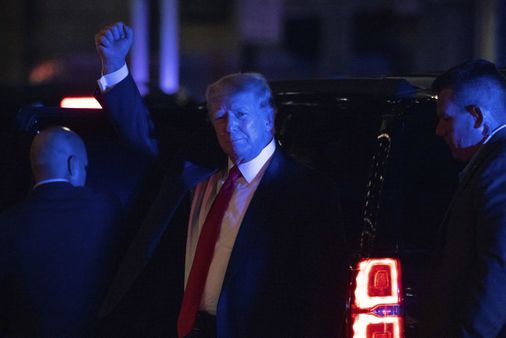 Look no further than GOP reactions to the FBI’s search of Donald Trump’s Palm Beach estate, reportedly for classified documents he is believed to have taken when he left the White House. If a “raid” at a former president’s home is unprecedented, so is a House minority leader threatening the attorney general of the United States.

“When Republicans take back the House, we will conduct immediate oversight of [the Justice Department], follow the facts, and leave no stone unturned,” Representative Kevin McCarthy, the leading House Republican, said in a statement after news of the search broke. “Attorney General [Merrick] Garland, preserve your documents and clear your calendar.”

That federal investigators appear to be following the facts while looking into Trump World and that the “raid” came after a subpoena is exactly why Republicans, the self-branded “party of law and order,” now want to “defund the FBI.” This is what Representative Marjorie Taylor Greene of Georgia, who has yet to find an inflammatory comment she won’t share, tweeted after Trump released a statement about the FBI’s visit to Mar-a-Lago.

Not to be outdone, Representative Paul Gosar of Arizona tweeted, “We must destroy the FBI.” Anthony Sabatini, a Florida state representative, said, “Any FBI agent conducting law enforcement functions outside the purview of our state should be arrested upon sight.” These aren’t outliers. With few Republicans even calling for the incendiary rhetoric to stop, the party’s silence is both revealing and complicit.

After deadly mass shootings in May at a Buffalo supermarket and an Uvalde, Texas, elementary school, Republicans didn’t call for the defunding or destruction of the NRA. But efforts to hold Trump, their twisted Mar-a-Lago master, accountable for his actions is provoking death threats against federal law enforcement.

Christopher Wray, whom Trump nominated to be FBI director after he fired James Comey in 2017, was once praised by Trump for his “impeccable credentials.” In the GOP cesspool, he’s now Public Enemy No. 2 (Garland, of course, tops their ever-expanding enemies list).

On Wednesday, Wray told reporters, “Any threats made against law enforcement, including the men and women of the FBI, as with any law enforcement agency, are deplorable and dangerous.”

“Deplorable.” We’ve heard that description of Trump supporters before.

On Thursday, a man clad in body armor and armed with an AR-15 style weapon and nail gun attempted to break into an FBI field office in Cincinnati. After a car chase and lengthy standoff, he was shot and killed by police. Authorities are investigating whether the man, identified as Ricky Shiffer, had ties to right-wing extremist groups.

By turning against the Justice Department and the FBI, Republicans are acting out their own version of Trump loyalists injuring more than 140 police officers during the insurrection. Testifying last year before the House select committee investigating Jan. 6, Daniel Hodges, a Metropolitan police officer on duty during the violent breaching of the US Capitol, said insurrectionists tried to “recruit” him, believing that, as a white cop, he should stand with them.

Hodges refused. The mob ripped off his gas mask and tried to crush him in a door.

GOP evocations of “law and order” — and there will be plenty between now and the midterms — are well-worn racist signifiers meant to charge up the fears of white suburban voters. But the hard rules of white supremacy dictate that law enforcement is an asset so long as it sustains white dominance. Like Hodges on Jan. 6, Wray and Garland are now viewed as an impediment to Republican authoritarianism.

It’s been more than 18 months since Trump left the White House, but the stench of his corruption remains as potent as ever. And Republicans pledge their allegiance neither to flag nor country, but to a man who pathologically cares only about himself.

Authoritarianism is a perversion of truth and law. Republicans have abandoned both to stay in Trump’s vulgar graces. When he refused to concede defeat in the 2020 presidential election, tried to thwart the peaceful transfer of power, and incited a deadly insurrection to overturn the election’s outcome, Republicans and right-wing media downplayed the violence and yelped about Hillary Clinton’s emails and Hunter Biden’s laptop. They care nothing about law and order.

In the uncertain weeks ahead, all of this is worth remembering. With this nation fragile and flailing, one political party is led by a man who represents the greatest threat to democracy in our history. As various investigations into Trump’s dealings continue, so will the death threats aided and abetted by Republican culpability.

Referring to the search of his Florida home, Trump lamented what he called “dark times for our nation.” He should know. It’s the former president himself and the party that marches in crooked lockstep with him snuffing out the rule of law and dimming democracy’s light.

Renée Graham is a Globe columnist. She can be reached at renee.graham@globe.com. Follow her on Twitter @reneeygraham.