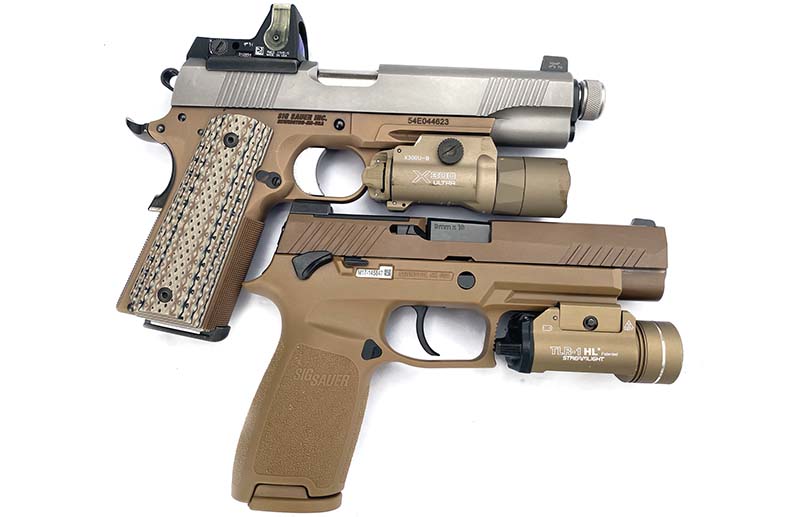 Are full-size handguns too big to carry? Sometimes small CCW pistol options are limited, so you need to know how to make do with what you have.

We all remember how toilet paper and hand sanitizer flew off the shelves a year ago. Akin to the aforementioned commodities, the surge in carry pistol purchases has created an artificial scarcity that has left the shelves stocked with less-than-ideal options for self-defense, especially outside the home.

For the latecomers to the game, full-size handguns are sometimes all that’s available. Luckily, carrying a big gun isn’t difficult; it just takes a bit more planning to make it feasible.

Handguns aren’t something that occupy a one-size-fits-all mentality. A Glock 19 is a small gun to some people, and it’s a large gun for others. It’s generally considered a happy medium, and many others have spawned in the same size and capacity range. As a result, it can be thought of as probably the most generic and “normal” handgun out there.

For our purposes here, we’re considering the Glock 19 and other in-class pistols as the cutoff for a full-size handgun category. While some will, of course, disagree, a 4-inch 9mm with a 15-round magazine is a large gun for a person standing at 5-foot-1 and weighing 100 pounds. It’s all relative to the individual, but the principles remain the same even if you’re 6-foot-4 and 300 pounds with hands large enough to palm a beach ball.

The first thing to consider about carrying full-size handguns is the type of holster that you should look at. The most reasonable option is to carry outside the waistband (OWB). This, of course, varies from the more popular inside the waistband (IWB) method, wherein the pistol is more easily concealed under clothing. An OWB holster is universally a better method for carrying a large gun for several reasons.

Weight distribution is a major factor in carrying a full-size handgun. Some larger guns are indeed much lighter than others, but the same applies to all in that the mass of any large gun is typically spread out across a larger area in the barrel and grip. This means that you’ll want to rock ’n’ roll with a holster that helps distribute that weight across a larger area on the belt. If you do this properly, you won’t even notice the weight of the gun on your hip.

A second thing to consider is overall comfort in relation to other methods of carry. IWB holsters typically address two areas of the body, those being strong side and near the appendix. Appendix holsters mount the gun in the front of the pelvis, making for a fast draw, but if you have a long barrel and grip, it’ll make sitting uncomfortable and very difficult to conceal in the front of the shirt. Strong-side carry IWB is feasible, but again—sitting can be uncomfortable due to the barrel extending further down, thus creating something of a lever against the seat, which can put pressure on the sciatic nerve in the pelvis and cause numbness.

The most uncomfortable thing about IWB carry with a full-size handgun is the bulge the gun creates against the body when the belt is tightened. Wearing a good belt is critical here, and because of added weight, the belt needs to be rigid and capable of bearing the extra mass without sagging. For this reason, OWB is clearly superior in that the belt can be worn as normal with no pressure points along its length. It can be snugged up like usual and you won’t experience the sliding or eventual numbness that can occur with a heavy gun stuffed down your pants.

Materials vary with individual preference, but today’s modern materials are much lighter than leather, which itself can add weight to an already heavy gun. The holsters featured here are from BlackPoint Tactical, and they’re experts in making products that blend materials like leather and polymer. These holsters take advantage of all their materials; the rigidity of steel belt loops, the flexibility and comfort of leather, and the weight savings of polymer. These holsters represent the best of what’s available for blended materials and have virtually no downsides for carry.

Leather holsters for full-size guns are definitely viable; however, most require break-in periods and don’t have the same resistance to sweat and abrasion as a polymer holster. Leather traps moisture and is slow to dry out when it gets wet. It should be noted that you’ll certainly need a holster to carry a large handgun, and if you only have access to a leather rig, you should certainly buy it even if it’s just a stopgap. Order times can be weeks—and even months—for a polymer holster these days.

If you have an obscure gun due to lack of availability of popular models, you might find that there are few holsters out there for your actual model. Luckily, especially when it comes to leather, you can find something that’s a near approximation. For many large pistols, the dimensions aren’t all that far off.

For instance, if you can’t find a holster for your used AREX at the pawn shop, oftentimes holsters for the Sig P226 will fit. You might have to do some playing around or buy a subpar option to start, but you should always do your best to at least get a proper one ordered; it’ll make a difference in comfort.

Know this: The standard $10 belt at the local grocery superstore won’t cut it here. A great number of people just stick a 1911 on their regular belt and are stunned by how terrible it is to carry. A proper belt for a full-size handgun isn’t hard to find, and many are old news today. I’ve favored the same Galco belt for almost 10 years. It has a rigid liner in it that prevents the belt from bending or flexing under weight, thus allowing it to take the weight of a large handgun without collapsing.

If a nylon belt is a bit too “military” for you, there are many companies that make very rigid and strong traditionally-styled belts as well. Bigfoot Gunbelts makes a steel-lined belt that’s probably the most rigid on the market today. This isn’t a cinch-style belt like the Galco, and it has regular belt holes in it to tighten it. VersaCarry also makes a fantastic gun belt.

Some people like the hole-style belts, but I’ve found that set holes can sometimes be too tight or too loose for carry with a heavy gun. The cinch-style is much better for comfort, as it can be adjusted exactly without being too tight or too loose. It’s equally uncomfortable to have a large gun moving around loose as it is to have it too tight. Fit should be snug and not painful.

For a long time, people have broken defensive pistols into two general categories: the carry gun and the “nightstand gun.” The carry gun is a class we’re all familiar with, and it used to mean relatively small, somewhat featureless guns … sometimes sacrificing power for size.

The nightstand gun is a category that usually contained the larger, more feature-rich handguns that could mount lights and larger magazine capacities. These were usually the 5-inch service pistols, such as the 1911 or Beretta M9, or even 6-inch .357 Mag. revolvers. The guns here were easier to shoot, but as this concept reached greater popularity, were rarely carried as a result of widely available compact pistols and a lack of holsters capable of allowing comfortable carry.

Times Have Changed For The Better

Besides being easier to shoot accurately, the major advantage of full-size handguns is greater opportunity to install accessories. This seems counterintuitive, but since a large gun already requires a bit of planning to carry, you had best take advantage of all the available real estate. A good thing is that most full-size guns today have accessory rails. Some do not, like classic 1911s, M9s and older models like the Sig M11A1 and original P220. The option to mount optics and red-dots also exists in these cases.

An interesting point to make is that the most common accessory for full-size handguns, the weapon-mounted flashlight, can often make a compact pistol as large as a full-size. For instance, the Glock 19 with a SureFire X300U mounted is as long as a 1911. You’ll need to get appropriate holsters for this, and it’s rare to find IWB holsters that support large, bright flashlights like the SureFire.

Optics are a fairly new category, but it’s now common to find factory guns with cuts for a variety of slide-mounted dot sights. The Trijicon RMR is the most well-known, but others exist that are more appropriate for a budget or used gun on the rack at your local store. These sights usually don’t add much weight at all, but they definitely add functionality.

Overall, a light and a red dot will make your full-size handguns only a few ounces heavier, but far more capable for more bad situations.

The most common full-size handguns on the shelf these days are the ones that people don’t usually want if they have the choice. These picked-over guns generally drop into two types: the used .40 S&W and the expensive 1911.

Guns chambered for .40 S&W aren’t too popular these days, and more manufacturers are dropping .40-cal offerings from their rosters. It was supposed to be a do-all cartridge, but it ended up being something of a redheaded stepchild instead. It replaced neither the 9mm nor the .45 ACP, both of which are more popular now than they ever were for their respective qualities.

The reason you find a number of used .40s on the shelf is because they’re just generally obsolete. Law enforcement agencies were the primary users of the cartridge, and then they began dropping it for 9mm as more advanced bullets became widely accepted and available. Surplus pistols are often cheap and badly beaten up, but they do work well in most cases.

If you buy a .40-cal., such as a Glock 22 or a Sig P320, you can easily get a second barrel in .357 Sig and 9mm, the latter of which will require new magazines. One gun can be easily swapped between these three calibers should availability be an issue.

The 1911 pistols are often priced above the comfort level of the average buyer. As a result, they’re probably the most common sight in the gun bread line at Cabela’s. These are heavy guns, but they certainly aren’t impossible to carry. The 1911 was the standard for about a century, and there’s a myriad of good holster options for them out there. Remember: A good belt makes the 1911 quite easy to tote around.

Take What You Can Get

A nice thing about larger guns is that they’re almost always available in one form or another. Hard times cause innovation, and it’s likely with more and more people owning guns these days, there’ll be a corresponding increase in demand for options to make them suitable for carry and everyday use.

Don’t be discouraged if a full-size pistol is all you can get—just make sure to take the steps to ensure it ends up on your belt and not just the nightstand.

Editor’s Note: This article originally appeared in the 2021 CCW special issue of Gun Digest the Magazine.

62 Printable MOA Targets with DOT Drills – Rifle Range in YARDS This impressive target pack from our friends at Storm Tactical contains 62 printable targets for rifle and handgun range use. Target grids and bullseye sizes are in MOA. Ideal for long-range shooting! Get Free Targets