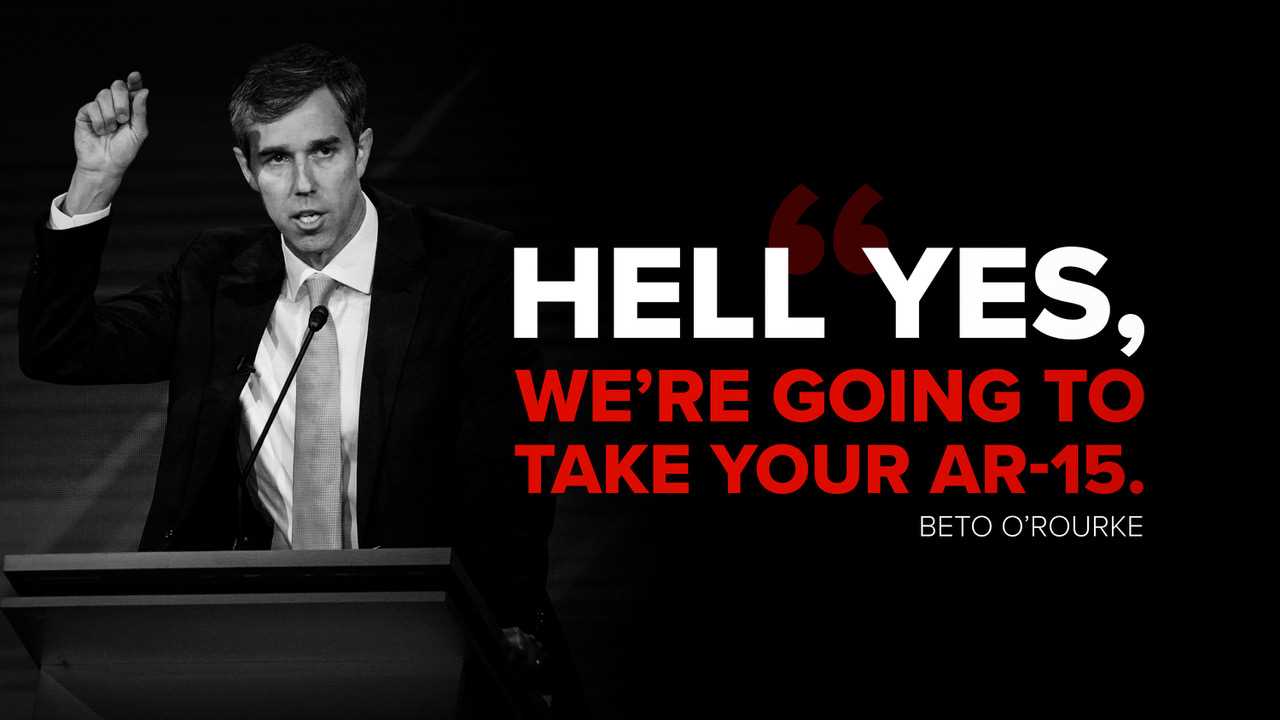 This radical position plays well with some Democratic presidential primary voters. It doesn’t with the Texas electorate.

That’s why the perennial loser has been working to muddle his gun control position.

Upon the launch of his gubernatorial campaign in late 2021, Beto made clear that he had not abandoned gun confiscation. A November 15, 2021 Texas Tribune item explained, “’Hell yes, we’re going to take your AR-15, your AK-47,’ O’Rourke said at a debate when he was running for president. Now he’s running for governor and said he won’t be backing down from the statement.”

The obfuscation began at a February campaign stop in Tyler, Texas, where Beto attempted to downplay his support for gun confiscation. The failed presidential candidate told those gathered, “I’m not interested in taking anything from anyone. What I want to make sure that we do is defend the Second Amendment.”

By spring, Beto was back to his extremist gun control rhetoric. A June 1 Texas Tribune article reported that the candidate advocated for a ban on the sale of America’s most popular rifle, the AR-15. The item went on to note, “when questioned about assault weapons on the campaign trail, O’Rourke often says he does not believe civilians should have them.” When asked during a town hall if he had softened his radical gun control position the candidate explained, “My position on this is consistent, and I know that not everyone here is gonna agree with me… I don’t think any civilian should own an AR-15 or AK-47.”

On August 14 Beto sought to further confuse Texans by tweeting a video featuring a purported “gun owner” who supports his campaign. In it, the “gun owner” states,

coming from a conservative town and a very conservative family, I still have people in my ear – that fear mongering that he was coming for out guns and I very much bough into it. I heard tonight, Beto out of his own mouth, say that he wants to protect our Second Amendment…

To the extent this video is legitimate, and not orchestrated by the duplicitous politician’s campaign, the “gun owner’s” community and family is 100-percent correct.

As made clear from Beto statements during his gubernatorial campaign, he has not abandoned the confiscatory gun control policies he adopted during his 2020 presidential campaign. Given this reality, it is instructive to recap those policies.

During the September 12, 2019 Democratic presidential debate, Beto was asked about his proposal to confiscate commonly-owned semi-automatic firearms. Beto responded in part by saying, “hell yes, we’re going to take your AR-15!” The Beto campaign would go on to sell t-shirts with the anti-gun slogan.

Less than a week later, Beto reiterated his call for gun confiscation on CNN’s Cuomo Prime Time. During an interview, Chris Cuomo asked Beto, “All right, so let’s state the proposition. Are you, in fact, in favor of gun confiscation?” Beto responded with “Yes.”

Beto was also the only presidential candidate to endorse the gun control “Peace Plan” put forth by David Hogg and his associates at March for Our Lives. The plan’s tenets included, annual gun licensing, a federal ban on commonly-owned semi-automatic firearms and their magazines, and “a reduction of our domestic firearm stock by at least 30%.”

Making clear that the candidate does not want to “protect our Second Amendment,” the “Peace Plan” Beto endorsed called to “reexamine the District of Columbia v. Heller interpretation of the Second Amendment.” Of course, the key holding in that landmark U.S. Supreme Court case acknowledged that the Second Amendment protects an individual right to keep and bear arms.

The media gadfly became so associated with confiscatory gun control that after bowing out of the race fellow candidate, and gun confiscation advocate, Joe Biden told a campaign rally that he was going to bring Beto to Washington “to take care of the gun problem.” Biden went on to add, “You’re going to be the one who leads this effort. I’m counting on ya.”

Beto’s support for gun confiscation is literally printed in black and white for anyone willing to read it. Aside from exposing Beto’s penchant for dishonesty, the candidate’s repeated attempts to obscure his position shows just how unpopular his unvarnished anti-gun policies are in the Lone Star State.