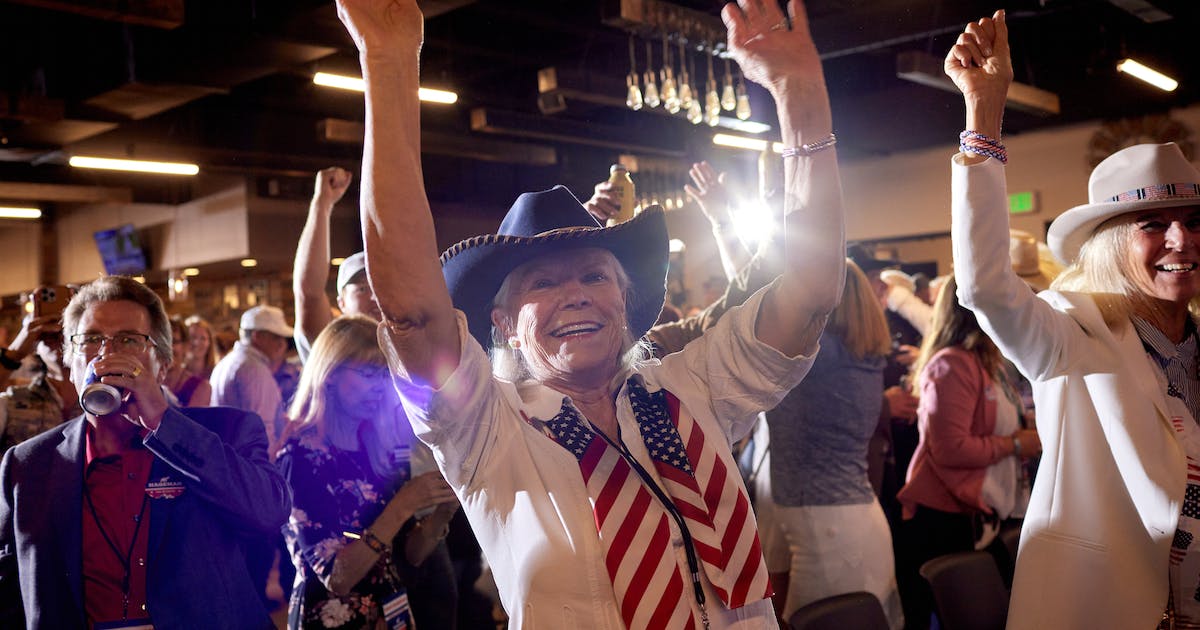 I agree with Gary Abernathy that the GOP has become a populist, Make-America-Great-Again party (“What is it about ‘get lost’ Cheney & Co. don’t understand?” print only, Opinion Exchange, Aug. 18). Its days of being the party of Ronald Reagan, let alone Abraham Lincoln, are long gone. I also agree most Republican voters are not members of the Proud Boys or the Oath Keepers or even the National Rifle Association, just as most Democratic voters aren’t members of the Sierra Club or Black Lives Matter. But what Abernathy writes next is laughable. He honestly believes most Republican voters “likely know the 2020 election wasn’t fraudulent,” but because the pollsters asking the question are considered part of the mainstream media they won’t give them the satisfaction of the truth? That’s one heck of a stretch. Instead, consider this more likely option: What if, because the Republican Party has lied and continues to lie about the 2020 election, Republican voters actually do believe the 2020 election was stolen?

What I don’t find funny is that one of our two largest political parties is willing to lie again and again about something so fundamental to our democracy. Maybe you’re a Republican voter and you’re OK with Trump, despite his many “unsavory” flaws, because you believe all politicians are flawed. Fine, but at least give this to Reps. Liz Cheney and Adam Kinzinger and every single Democratic politician: They are not lying to you about the 2020 election.

The commentary excoriating Cheney and company is probably correct in its assertion that the GOP is not the party it once was. Or at least elements of the party have changed in a way that would be unrecognizable to Reagan, Dwight Eisenhower or any number of other rock-ribbed conservatives who found a philosophical home in the Grand Old Party. This then raises the question: What does it mean to be a Republican today, and what are the ideological underpinnings of the “new” Republican Party? One of these questions is simple. If one is to be a true Republican today you must either believe or pretend to believe that the 2020 election was stolen from Trump. If not, you will be branded an apostate and consigned to the backbenches of party politics. This is a lie. The party ideology is less about belief than it is about fear. MAGA Republicans don’t ever articulate a positive vision, they warn about a collection of boogeymen. You cannot sustain a political movement by every so often opening a Pandora’s box of fears, and lies cannot be the foundation of anything meaningful.

Politically, I might best be characterized as a right-of-center Democrat. I don’t think that most Republicans are “terrorist- or conspiracy-based” members of the Proud Boys or Oath Keepers. Neither do I see the Democratic Party as “distinctively stand[ing] for truth, justice and the American Way.” In characterizing either group as such, Abernathy adds nothing useful to the discourse. Cheney will never be my candidate of choice, but her example of integrity can be a lesson to both parties. American needs two viable and honorable political parties. God help us if people like Cheney ever decide to follow Abernathy’s suggestion and “get lost.”

Abernathy suggests Cheney’s recent primary loss “was predictable — not just because of … her decision to join forces with Democrats on the Jan. 6 select committee … .” A note to all media (as most descriptions of the hearings are described this way): The Jan. 6 hearings are not Democrats (and Liz Cheney) against Republicans. If anyone has noticed, there is another Republican on the committee, and the vast majority of witnesses testifying before the committee are Republicans.

Those who proclaim that “abortion is murder” express the moral righteousness of someone thinking they can sit in judgment of others when in fact they cannot. Human lives are taken all the time. Whether it’s murder or manslaughter or self-defense or a decision to withhold nutrition and hydration to someone in a persistent vegetative state (end-of-life care), someone makes a decision and a human life is ended as a result. Is it “murder” in every case? To some, perhaps so. But who makes that decision, ultimately? Is it the minister in the pulpit, or is it the people who are most immediately impacted, along with the guidance of qualified legal and medical professionals? Why is it different in the case of a woman with a pregnancy that she — for any number of legitimate reasons — can’t be permitted to end that pregnancy?

It is a distortion to claim that those of us who believe that abortion be permitted think it’s the go-to solution without careful consideration of the consequences. Let’s be clear: An abortion is a deliberate act and should be carefully considered not only in light of one’s religious beliefs, but one’s safety, health and well-being. This is not the province of priests, ministers, politicians or bureaucrats. This is the solely the province of any woman who must bear the consequences of a pregnancy, in concert with her doctor, her family and anyone else she considers to be a trusted adviser.

I’d like to add a perspective to the school-naming debate (“The nuances of naming,” Readers Write, Aug. 19). Maybe it isn’t only about whether or not a person owned slaves (and maybe that’s reason enough). Today, in the 21st century, some of us feel the majority of roads, buildings and places named nearly exclusively to honor white men do not represent a full history. I can’t say with certainty, but it’s fair to guess that most of the places named 100 to 200 years ago were named by white men because women and people of color around them didn’t have a voice.

Names matter. If they didn’t, they wouldn’t generate so much debate.

We have budget shortfalls, a shortage of school bus drivers and a shortage of teachers, to name some of the more urgent school-related matters. Yet the Minneapolis school board wastes time and energy choosing to rename Patrick Henry High School. I would give 1,000 to 1 odds that if you stopped 100 people and asked “Who was Patrick Henry?” that less than five people would have any idea.

Teaching American history in a positive light seems to be out of favor. Why not celebrate the history of America, a place where people will travel hundred of miles on foot, cross deserts and risk their life for just a chance to live in the United States.

I am writing in response to the debate regarding changing the name of Patrick Henry High School. Rather than naming a school for a political leader, why not choose instead one of the many champions of education in this country and beyond? I would be proud to know my grandchildren attended Plato High School, for example, or, to choose a more local figure, Horace Mann, who not only was a great education reformer but a slavery abolitionist to boot. (I am aware that some districts have already wisely named a school after this hero.) Not only would these choices quiet the activists, but it would send a signal to our children that education is most highly valued.

Suni Lee is a much-needed ray of sunshine in our dark, troubled times (“Lee surprises students at alma mater,” Aug. 19). So thankful for her amazing gifts of determination, joy, hope, vitality and love that she so generously shares with all of us! She is truly an inspiration!