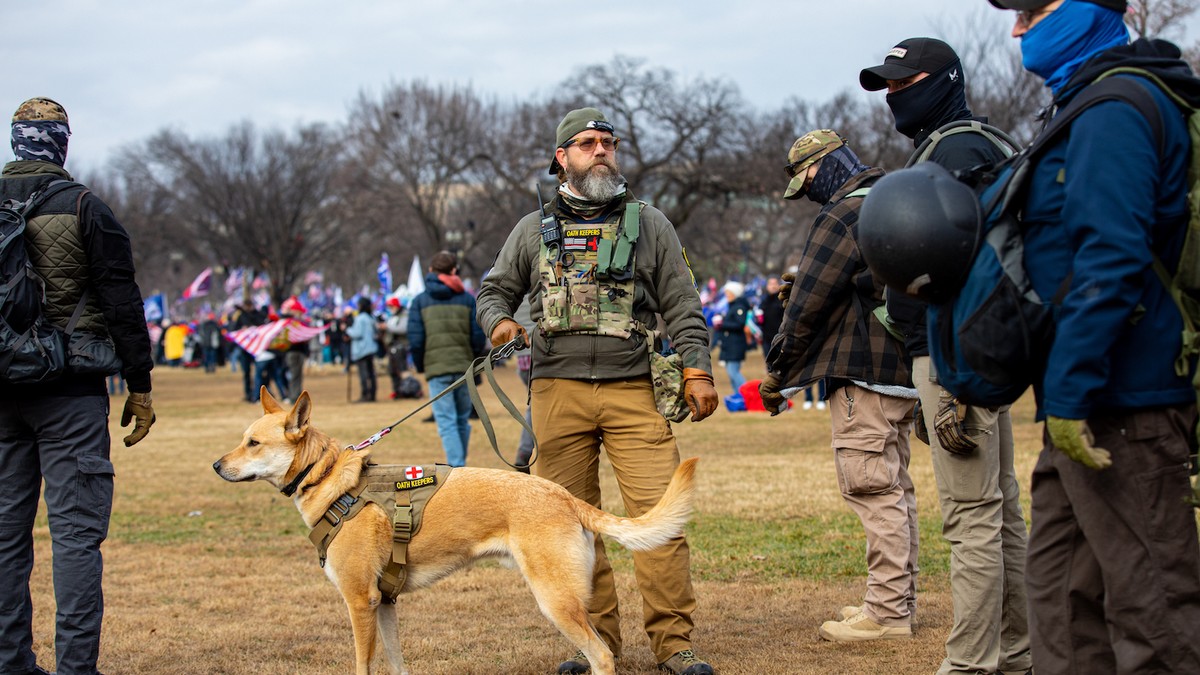 This content comes from the latest installment of our weekly Breaking the Vote newsletter out of VICE News’ D.C. bureau, tracking the ongoing efforts to undermine the democratic process in America. Sign up here to get it in your inbox every Friday.

It’s important to take former President Donald Trump seriously and literally when he and his acolytes spew violent rhetoric. But for all the attention it deserves, the actualized political violence done on Trump’s behalf is more important. This week, the trial of Oath Keepers founder Stewart Rhodes and four co-defendants began. The gang is charged with seditious conspiracy for what the feds say was a long-running plan to stop the peaceful transfer of power using weapons the extremist militia group stockpiled in a hotel.

VICE News’ Greg Walters was in the courtroom this week, so I caught up with him to see how the first—but not the last—seditious conspiracy trial is going.

It is very difficult to look at the opening of this trial and conclude that it has gone well for the defendants. One of the things we saw very early on is the government has a lot of evidence that the group began planning way ahead for the violence that overtook the Capitol on Jan. 6, 2021. They have tens of thousands of texts. They have financial records for the group. There are many, many hours of video.

And as I understand it, there are, in the common parlance, tapes.

There are tapes and tapes and tapes. And it’s very clear that the feds got way into the electronic communications of the Oath Keepers. They’ve got their Signal messages. They had an apparently full recording of a 126-minute call with over 100 attendees on Nov. 9, 2020, just days after the election was called. They have Rhodes on this big group call laying out the plan. “Our mission is going to be to go into D.C.,” he says, “so if the shit kicks off, then you rock and roll.” They’re talking about stashing weapons in Virginia. Prosecutors played a recording of Rhodes, made less than a week after Jan. 6, where he says, “My only regret is that they should have brought rifles.”

The defense attorneys have not, shall we say, had their finest hour so far in this trial. There have been a few self-owns that have gotten Judge Amit Mehta so upset that he delivered what I think you’d have to call a bench-slapping.

At one point, the attorney for one of Rhodes’ co-defendants argued that his client was not a dues-paying member of the Oath Keepers. He asked an FBI agent under cross-examination if the agent would agree that his client is not a member of the Oath Keepers. The lawyer says, “He didn’t pay his dues. You can’t be a member of the NRA if you don’t pay your dues.” And the FBI agent says, “Well, if you don’t pay your dues, you can still be a member of a gang.” Judge Mehta got upset at the defense over and over again for just not being prepared.

Ouch. So, are these Oath Keepers in worse shape now than when this trial began?

I would imagine they have to be sitting there wondering if they should have tried to score a plea deal and cooperate, which others have, because the evidence has been landing in the trial with a loud thud, and it doesn’t look great for them.

So what about some of the Oath Keepers who’ve copped pleas and cooperated? Are we going to hear from them?

I believe we probably will. Another thing to watch out for is that Stewart Rhodes’ attorney says Rhodes is going to take the stand and testify. He apparently is so confident in his persuasive powers that he believes he can save himself from decades in prison. I’m not looking at that evidence and thinking it’s going to be easy for him to overcome. But we’ll see.

Big picture, the defendants are going to raise what I call the Trump defense. They are arguing that they were preparing for Trump to invoke a centuries-old law called the Insurrection Act, which critics say is very poorly defined and very vague. Which would have allowed Trump to effectively turn them into his personal militia. Trump never did this. But their argument was that they thought he could. And Rhodes publicly urged Trump to do it.

Even if that’s the case, one thing I’ve wondered is if it’s legal to amass weapons and plans in anticipation that a president might do a thing that’s not legal otherwise?

Well, I get a sense that is literally what the court is about to decide. The prosecution argues that’s not what they were doing. That they were gonna move into D.C., no matter what.

We don’t know how exactly this will go, but with everything the prosecution appears to have, is there a way out for these guys?

They do have another way out, even if they lose this case, which is that if they can publicly demonstrate the kind of fealty to Donald Trump that appeals to his self-image, they might be able to convince him to pardon them if he becomes president again.

He has said publicly more than once that people who participated in January 6 deserve pardons.

And there may be an incentive for them to use the publicity of the trial to appeal to a guy who could let them out of what otherwise might be a life sentence. We have to see how this goes.

Neither hurricanes nor delay tactics can keep This Week in Subpoenas from its appointed rounds!

Move over, Oath Keepers! One of the Proud Boys charged in another seditious conspiracy around Jan. 6 has pleaded guilty and agreed to flip. Jeremy Bertino copped to one count of sedition and a related weapons charge, but the more interesting part is that his deal requires him to tell the whole truth about the alleged plot to occupy government buildings and prevent the certification of the 2020 election. And by the way, prosecutors say Bertino’s testimony could be so sensitive that he may need witness protection. The seditious conspiracy trial of longtime Proud Boys leader Enrique Tarrio and five alleged conspirators is set for December.

– Gavel to me one more time

Now that multiple criminal investigations of the coup attempt and other lawlessness are in play, does the January 6 committee almost seem… quaint? Don’t slight the select committee just yet, because they’re back in public next Thursday for (probably) the last time. This final hearing before the election was postponed by Hurricane Ian. But what’s happening behind the scenes could be just as important as what goes on in front of the mics.

Except for what’s been on TV, Jan. 6 investigators have so far kept their mountains of evidence and witness transcripts secret, mostly so they don’t disrupt the Oath Keepers’ sedition trial. That trial could be over in a couple weeks, which suggests prosecutors, and the public, could get access soon.

After all this, the feds think Donald Trump is STILL illegally hiding some documents. The closer any potential charges for taking, mishandling, and hiding classified documents get to the 2024 election, the better chance Trump has of poisoning them as politically motivated. Let that basic truth inform all your reading about all the many claims, counterclaims, special masters, and special pleading Trump is dumping into the Mar-a-Lago documents well.

The 11th Circuit Court of Appeals, on the other hand, has the need for speed. The court this week granted DOJ’s request to rule quickly on the ruling from (Trump-appointed) Judge Aileen Cannon that subjected some 11,000 seized documents to a review by a special master. Bottom line: All the arguments have to be in by Nov. 17, and Trump doesn’t get to delay it into next year like he wanted to.

The Supreme Court kicked off its October term with a challenge to Alabama Republicans’ bid to dilute the power of Black voters in their state. It’s hard to know exactly where the court is headed in this case, but given conservative courts’ years of hostility to the Voting Rights Act, there is no reason for optimism.

Merrill v. Milligan turns on Alabama’s congressional district map, which used to have two Black-majority districts, and now, after the 2020 census, has one. Section 2 of the VRA bans disempowering voting districts based on race, and Alabama Republicans claim they had no race-based intent.

The AP has a nice (and by nice, I mean infuriating) wrap of some of the biggest efforts to recruit conspiracy-jangled loyalists as poll watchers. It’s all fueled by the grand Trumpist tautology that “concerns” over election integrity demand an emergency response, while ignoring the very emergency created by Donald Trump lying about it since 2020.

Regular readers have heard me harp on this before. The real problem here isn’t that Trumpist Republicans are keen on civic engagement. It’s that the baseless conspiracy theories and phantom cheating that Trumpists howled about from the outside in 2020 can now be conjured from the inside. Combine that with motivated stolen-election loyalists potentially installed in swing-state governor and secretary of state offices, and you can see how easy it will be for them to refuse to certify a close election they lose.

Liz on tour — When Rep. Liz Cheney is no longer in Congress, she’ll have a PAC, and maybe (?) a Trump-spoiling presidential campaign for 2024. In the meantime she’s been on the road. Cheney made speaking stops in Syracuse, New York, and in Arizona, which is a veritable snakepit of election denialism seeking power.

Good stuff from Cheney, at the non-Trumpist GOP-heavy McCain Institute: “If you care about democracy, and you care about the survival of our republic, you need to understand—we all have to understand—that we cannot give people power who have told us that they will not honor elections.”

Are you qualified for this mob? — Are you a Jan. 6 insurrectionist convicted of rioting or assaulting police officers and find yourself looking for that NEXT perfect gig? Or maybe you’re an employer who’s looking for the kind of initiative that only an alleged domestic terrorist can deliver. The “Jobs for J6” board at pro-coup Look Ahead America has you covered!

Sales in the storm — I’m not saying Trump’s full embrace of QAnon was a hacky play for money on his struggling social media platform, but it DID happen to coincide with advertisers adopting Q-based marketing for the stuff they sell on Truth Social. Just sayin’!

Michael Flynn, Donald Trump, and the ascendance of spiritual warfare in America. NBC

The most terrifying case of all is about to be heard by the U.S. Supreme Court. THE GUARDIAN

Firewood is the new Toilet Paper! Here is why!
A plea, a shout, alas, a reiteration over mass shootings
Historic! PT Usha set to get elected as IOA chief
Bushclass lessons
The CCW Basic Proficiency Test