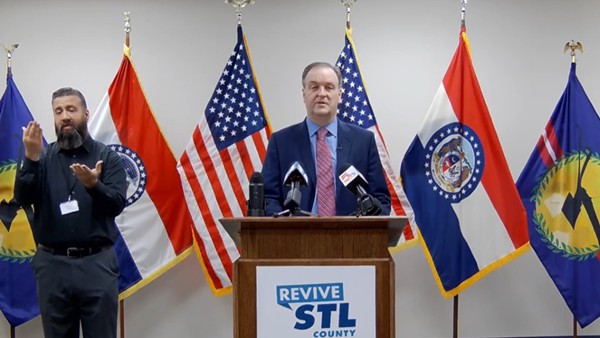 Sam Page still has to approve the measure.

In 2008, then-state Representative Sam Page ran unsuccessfully for the post of Missouri lieutenant governor. But the man who managed Page’s campaign would go on to a certain measure of success as a familiar face in the St. Louis region.

His name is Jeff Roorda.

Perhaps you’re familiar with Roorda’s work as St. Louis’ most noxious racial agitator for white people. He’s the one who sported the “I am Darren Wilson” rubber bracelet backing the police officer who killed Michael Brown in 2014 in Ferguson. Roorda would become a lightning rod for racial division during his wretched tenure as business manager of the St. Louis Police Officers Association.

But until this year, Roorda was a Democrat. He and Page were friends and colleagues on the Democratic side of the aisle in the Missouri House when they served together from 2004 to 2008. Page’s campaign-finance reports list payments to Roorda for campaign management.

Roorda won election four times as a Democrat for his state House seat representing Imperial, Missouri. He lost it once in 2010 to Republican Paul Wieland, who defeated him again in 2014 in a state Senate race. This year, Roorda switched parties to run as a Republican for state Senate. He lost a primary race many thought he would win. Then he lost his job in the city.

Personally, I don’t think party labels are the ones that matter when Roorda is the subject of discussion. Suffice it to say, Sam Page’s erstwhile campaign manager is not likely to be teaching critical race theory anytime soon.

Suddenly, however, party labels are everything to Page and his supporters. In fact, it might be the only thing they want to discuss in his reelection campaign — such as it is — against businessman Mark Mantovani.

Mantovani did have to execute at least a nominal party switch to run against Page on the Republican ticket for county executive. He was selected last month by Republicans after the party’s bizarre primary choice, Katherine Pinner, stepped aside, perhaps to devote more time to hunt evil forces implanting chips in our vaccines.

Mantovani has run twice unsuccessfully in the Democratic primary for county executive, losing narrowly in 2018 to then-County Executive Steve Stenger and running second to Page in a four-way field in 2020. Now he’s on the Republican ticket for a job that has little to do with partisan issues (and would be nonpartisan in most other similar jurisdictions).

Mantovani’s party switch would only matter if it meant that he inexplicably transformed into a Trump-loving follower of the authoritarian forces that have infested the GOP. In his past races, he seemed more like a moderate independent or Republican than a Democrat, which was no big deal to me.

But if Mantovani proves to be the same guy he has been in the past — which is to say passionate only about issues of county governance, with little or no reference to national topics — then I don’t care if he runs as a Whig.

Especially since he’s opposing a guy who can’t even carry the Democrats on his own County Council.

There are four Democrats there. Two of them, County Council Chairwoman Rita Heard Days and Councilwoman Shalonda Webb, are Black women with extraordinary resumes and a reputation for independent thought. Both qualities seem to threaten Page on some deep psychological level.

Days and Webb have sometimes formed an unlikely voting alliance with Republican Councilmen Tim Fitch and Mark Harder, usually on matters in which Page failed to show honesty or accountability in managing county government. Days and Webb have also stayed united in calling out Page for repeatedly shortchanging north county and, especially, its Black residents.

Page has maintained support from Councilwomen Kelli Dunaway and Lisa Clancy, both progressive white women. Clancy is the sister of Page’s most recent campaign manager, albeit not Roorda this time.

Of the three Republicans on the council, only Page’s close personal friend — right-wing Councilman Ernie Trakas — votes with Page frequently. Perhaps that’s because, on Page’s watch, the county spent $60,000 to pay off a sexual harassment claim against Trakas, the self-proclaimed taxpayer watchdog.

The Page administration thus advanced the cause of “believing the man” who insists the woman’s claims were totally invented and bogus. As one does as a Democrat?

And Trakas wasn’t the only Republican official accused of harassment who was shielded by Page. Who could forget another of Page’s good pals from across the aisle, Phantom Auditor Mark Tucker, who seems to have drawn county paychecks as an auditor for nearly four years — thanks largely to Page — for doing at most six audits in three years and getting an F from State Auditor Nicole Galloway, who, unlike Tucker, is an actual auditor.

Tucker was the subject of multiple harassment allegations, including one from of a former Trakas staffer. But to borrow auditor speak, who’s counting?

Still, Page’s not-so-Democratic record on sexual harassment pales next to what he has done on race. To be clear, Page has never trafficked in the incendiary rhetoric of Roorda. Not many have.

But Page or his administration is a defendant in multiple race-discrimination lawsuits from county police officers. The most famous is from Lieutenant Colonel Troy Doyle, the Black officer who was a near-consensus choice for police chief until — with Page’s direct involvement — he curiously was passed over for a white candidate, Mary Barton, who, if I may be indulged the understatement of the year, didn’t work out so well.

Then again, almost no Black people have worked out so well at or near the top of the overwhelmingly white Page administration. Just saying.

All this is presumably unrelated to Page having been Roorda’s client in 2008. But it did send me on a brief online search of “Page and Roorda” from the first decade of this century.

On June 29, 2008, the Springfield News Leader reported that Democrat Page had this shocking response to a landmark U.S. Supreme Court ruling striking down a ban on handguns in Washington, D.C. Except for Page, it had been hailed as a triumph for pro-gun conservative Republicans.

“I completely support today’s U.S. Supreme Court decision upholding the right of law-abiding citizens to own firearms and overturning the District of Columbia law banning ownership of handguns,” Page said to the gasps of all Democrats within earshot.

It was so outrageous that opponent Lieutenant Governor Peter Kinder attacked Page (who had earned an F from the NRA as a legislator) for “a stunning and transparent act of hypocrisy.” Even the NRA called Page out for pretending to support it.

There was another Page “not-so Democratic, not-so-great hit” that year. The Post-Dispatch on March 14, 2008, listed Page as just one of 10 Democrats to join all Republicans in support of a “hate-mongering” bill to bar illegal immigrants from state colleges.

“Hate-mongering” was the phrase used by Roorda as he voted against the bill — with 38 other Democrats, on the opposite side of Page. Now, that’s a good one.

Surely, there must be good reasons to vote for Page’s reelection. Perhaps his administration got you or someone dear to you a county job or contract. Maybe you’re sick of seeing politicians on the airwaves and admire that he’s a recluse when it comes to the media. Or even more novel, you think he has done a bang-up job as county executive.

But vote for Sam Page because he’s a Democrat?

You must be kidding.

Ray Hartmann founded the Riverfront Times in 1977. Contact him at [email protected] or catch him on Donnybrook at 7 p.m. on Thursdays on the Nine Network and St. Louis In the Know With Ray Hartmann from 9 to 11 p.m. Monday thru Friday on KTRS (550 AM).