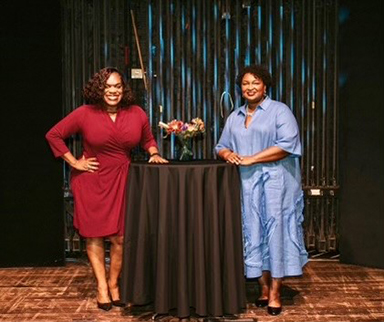 The 52-year-old Black woman attorney is the Democratic Party nominee for the Florida 4th Congressional District, that includes all of two suburban counties, Nassau, and Clay and about one-third of Jacksonville. The new district was gerrymandered by Governor Ron DeSantis so that a formerly Black congressional seat, would elect a white Republican power broker.

LaShonda has pulled together a mix of voters that has a pathway to victory. But there seems to be a conservative media blackout of this campaign, much like the last two hundred years of failing to report the real Jacksonville history.

LaShonda worked in Congress on the staff of legendary Carrie Meeks, the first Black elected to Congress since the end of reconstruction in the 1870’s. Congresswoman Meeks was mentored by educator Dr. Mary McCleod Bethune, advisor to presidents Roosevelt and Truman. LaShonda was mentee to Carrie Meeks. There is a straight leadership line between these strong Black women. Holloway reflects Meeks and Bethune.

LJ will introduce or support legislation that will allow women all over the US to decide whether to give birth, provide for all access to healthcare, affordable housing, small business development, expansion of social security, climate action, criminal justice reform, strong gun regulation, education technology, expanding veteran services, expansion of voting rights, expanding veteran rights and programs. She says Donald Trump lost the 2020 election.

Her opponent, Aaron Bean, a state senator from the district, and one of the most powerful men in Tallahassee is against all measures LaShonda supports, with exception of affordable housing. He is also endorsed by Donald Trump, says Trump’s 2020 election was stolen. He is supported by many powerful financial interests that want to reduce, end, and privatize social security, privatize prisons and lock up more people, deny veterans benefits, ignore climate change, support the National Rifle Association proliferation of guns, vote against benefits to Floridians hit by hurricanes and much more that describes Florida of the 1800’s. His campaign war chest is vast, enough maybe to overwhelm L J’s grassroots campaign.

But maybe the National Organization for Women (NOW), Moms Demand Action, the Democratic Women’s Caucus, the Democratic Women, Women Information Network that support and endorse L J have the juice to retire men like Aaron Beam to the dust bins of history. It is no secret that white women are upset over the Supreme Court abortion ruling that allows states like Florida to ban abortions. Whether their messaging reaches women and will be effective with women of all colors is a big question.

“Abortion is on the ballot! If you want to stop the GOP’s national abortion ban, send Val Demings and LJ Holloway to Congress” L J tweeted recently. Val Demings is a Florida congresswoman that is currently running to represent Florida in the U.S. Senate.

“Forced pregnancy and childbirth is not only an attack on basic human rights, but it also can be considered a state-sanctioned act of violence against Black women—who already face a growing maternal health crisis”, another Holloway tweet continued.

LaShonda was born premature and as an adult had brain cancer that cost her $2,500 for each monthly injection. Her demand for healthcare affordable for all is clear.

There is no doubt about L J’s grassroot support. If local reporters were to interview Ben Frazier, executive director of Jacksonville’s Northside Coalition,  or Michelle Brown, president of the Jacksonville National Council of Negro Women, or Nassau County’s Phil Morton or compassionate Republican Bruce Jackson, the pathway to victory would be certain. That is not expected. If at all the prejudiced presses and media in Florida will continue to blackout this campaign until they see a Holloway victory is likely.

Jacksonville media has often been silent on racism. An example is in 1960 the axe handles demonstration.  200 white men armed with axe handles and accompanied by police, attacked black high school and college youth as they demonstrated against segregated lunch counters. The event was reported around the world. But not in Jacksonville.

This election seems to be on the same track.