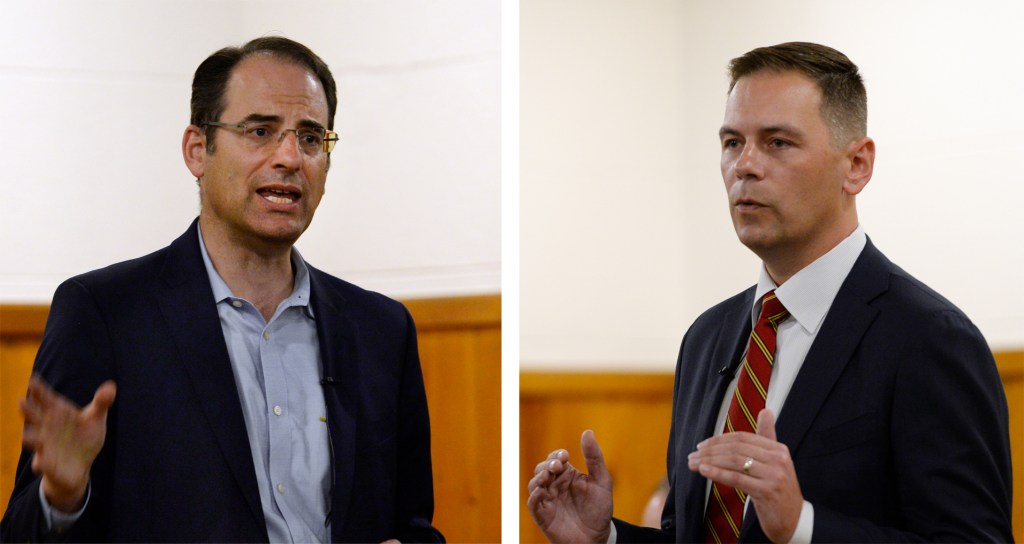 The job of an attorney general is broad-ranging, but one issue has been top of mind in the race between Democratic incumbent Phil Weiser and GOP challenger John Kellner: rising crime.

Kellner, the district attorney of the 18th Judicial District (Arapahoe, Douglas, Elbert and Lincoln counties), was elected to the role in January 2021. Although he has not completed his term, he decided to run for attorney general because he said he found himself spending time at the Colorado Capitol advocating for issues that affected people statewide and he believes the only way to change crime trends in his district and others is to tackle policies at the state level.

He refers to legislation supported by Weiser as “soft on crime” and “offender friendly,” and he wants to see trends reversed on bills passed such as the SB21-217, a misdemeanor reform, bill.

But Weiser calls the criticisms against him “intellectually dishonest,” particularly as they relate to the growing fentanyl crisis, saying he called for action before others did. Many of the policies passed at the legislative level led by Democrats also had support from Republicans, he said, and he attributes part of the problem to not enough law enforcement officers. Weiser has spearheaded efforts to better recruit and retain officers.

Judicial District 18’s increases in crimes against property and sex offenses were also higher than the state’s, though the increased percentage of motor vehicle theft was lower.

Kellner points out that his district’s overall crime rates (per 100,000 people) in both 2020 and 2021 are the lowest in the metro area. The Denver Post has verified this by comparing districts 1, 2, 17 and 18 through analysis of available statewide data.

“What I’m hoping to see statewide is a return to some of the common sense public safety policies and laws that, in recent memory, had Colorado as a much safer state,” Kellner said.

For Weiser, the solutions center around bipartisan approaches and he points to work on the Red Flag law, a protection order gun safety law and safe storage as addressing concerns about rising violent crime and gun violence. Although Kellner said he supports measures like safe storage, the National Rifle Association rated him as a pro-gun candidate.

Supporters cite Weiser’s collaboration as one of the reasons they back him — the list of people who have endorsed him includes Republicans such as former Republican Attorney General Cynthia Coffman and state Sen. Don Coram.

Both Weiser and Kellner acknowledge that the attorney general’s impact on crime rates is not direct unless the office is investigating organized crime or convening a grand jury, but more impact comes from supporting or opposing legislation.

Crime, however, is not the only issue the state’s top prosecutor is charged with addressing, though for Kellner, “elevating issues of public safety” is a prime concern.

Weiser has sued big opioid drugmakers for allegedly contributing to an epidemic and e-cigarette manufacturer Juul on allegations of deceptive marketing. He’s worked to defend Colorado’s water rights, convened a grand jury to investigate the death of Elijah McClain, established a consent decree with the Aurora Police Department and is investigating social media platforms on the effects of teen mental health. He believes his record will speak for itself on Election Day.

Kellner said some of the issues like defending water rights are nonpartisan issues, and he agrees with holding drugmakers accountable and protecting Coloradans’ data privacy rights. But he doesn’t necessarily agree on all Weiser’s approaches and argues that Democrats are not looking out for Coloradans.

The general rule of thumb during a midterm election year is that the opposite party of the U.S. president will do better in statewide races, giving Kellner an advantage, but political analysts say the race has become more competitive after the U.S. Supreme Court Dobbs v. Jackson Women’s Health Organization decision.

The attorney general would also have to make some legal decisions about abortions, particularly as people from other states seek them in Colorado. (Weiser has been a vocal advocate of abortion rights and Kellner said he supports the governor’s authority to issue a directive against extraditions for abortions and said the attorney general’s role is to ensure the state’s laws are being followed — in this case, Colorado’s law guaranteeing abortion rights.)

In the attorney general race, what’s happening in the national landscape would generally be indicative of how a “generic Republican” would do in a statewide election, particularly one who has not embraced election denialism, said Mario Nicolais, an election law attorney and political strategist. But the case that overturned Roe v. Wade has energized the Democratic base, he said, “and that cannot be overstated.”

“Midterm elections are invariably about turnout and particularly about turning out your own base (when there’s) less voter participation overall,” Nicolais said.

But it’s not just about the base — Republican-leaning unaffiliated voters who are pro-choice or have more moderate political views may vote against the GOP in this election as they see proposals for national bans, including those without exceptions for rape and incest, he added.

Nicolais believes Kellner has some new obstacles with the Colorado electorate, saying the Republican message resonated better before the Dobbs decision when people were more focused on inflation, the economy and even crime. And no matter what position a Democrat is running for right now, Dobbs is part of their discussions.

Despite a focus on crime in this race, Nicolais doesn’t think it’s going to be at the top of the issues for voters unless they’ve been directly affected by it. Plus, he notes, Democrats in Colorado have outraised their Republican opponents this year.

CU Denver Dean of the School of Public Affairs Paul Teske said he’s not sure how much of a role Dobbs will play in statewide races when abortion is not on the Colorado ballot, but he said he wouldn’t be surprised if Democrats hold onto a lot of statewide seats in this election. Still, he thinks the races will be close.

“Really all the advantages nationally and in the economy, inflation and crime rates would seem to be with the Republicans,” Teske said. “And in several of the races, the Republican Party nominated the somewhat more moderate candidates … So I feel like there’s a lot of things leaning in favor of Republicans in Colorado.”

But if Republicans can’t win some of those races this year, even without “MAGA candidates,” Teske said it would be hard for him to imagine the GOP doing better down the road in the state.

Old Timer Knives MADE IN THE USA AGAIN! – Old Timer Bruin Pocket Knife
Christmas Tree Hunt 2012
.44 Magnum Model 29 8-inch (Close-up)
Thunder and Lightning – Utilizing a Massive Rock for a Day Camp in Heavy Flooding Rains
Calling on Angels to Join a Rock Star, Lakota Chief and Nonprofits to Win The Race to Save The Wild Horses