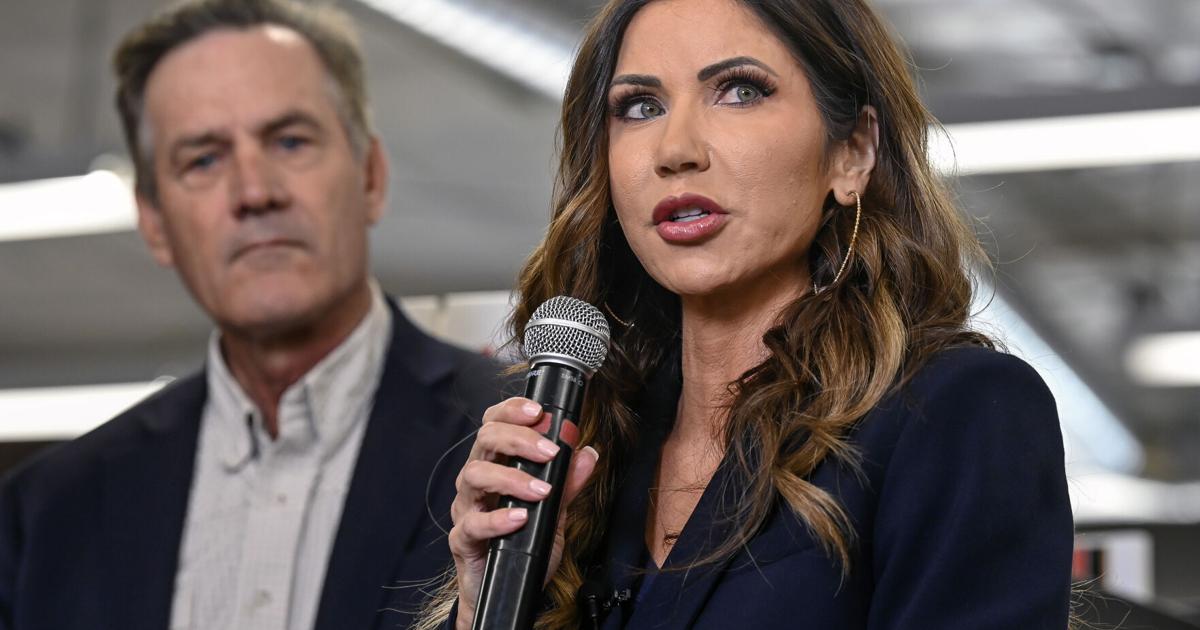 On the night of Sept. 21 in Washington, D.C., Kristi Noem’s face appeared on a video screen at an event hosted by the Media Research Center, a conservative watchdog group that aims to “expose and neutralize the propaganda arm of the left: the national news media.” The organization was celebrating its 35th anniversary with a black-tie gala at the National Building Museum and promised to “honor those who have stood up to the left-wing mob.”

Noem, who had planned to attend in person, said her travel was curtailed by back surgery at the Mayo Clinic earlier in September for an acute condition of her lumbar spine. She submitted a videotaped message that echoed the media-bashing mantra popularized by her political ally, former President Donald Trump.

“What we did during the [COVID-19] pandemic worked, even though the liberal media tried to prove otherwise,” Noem told the audience. “So now they have their sights on me in all kinds of ways. They’re attacking my family, they’re attacking every decision that I make, and they’re trying to tear South Dakota down. But that isn’t going to happen. Not on my watch.”

Noem has found the national spotlight, building a brand of right-wing populism unrecognizable in many respects from her career before Trump became president and the pandemic made polarization and personal attacks common in American discourse.

Noem’s supporters laud her laissez-faire approach to pandemic response and cite her national profile as positive for selling South Dakota as a land of opportunity rather than a flyover state. Business applications increased by 6.4% in August, the highest rate in the nation, according to the U.S. Department of Commerce, and the unemployment rate stands at 2.3%. South Dakota ranked second in the amount of state-to-state migration that was inbound (69%) rather than outbound in 2021, according to Atlas Van Lines.

Among other concerns, critics accuse Noem, who is up for reelection Nov. 8, of being hypocritical. She talks of less government while South Dakota reaps the benefits of millions in federal COVID and infrastructure funds, re-branded as state-level stewardship. She touts her “no lockdown” pandemic record despite closing schools in the spring of 2020 and proposing laws seeking more authority for state and county health officials to shutter businesses that violated CDC guidelines. And she lavishes praise on Trump despite saying in 2015 that some of his stances were “un-American” and that he was “not my candidate.”

“She’s like a political chameleon,” said Lance Russell, a former state legislator from Hot Springs who also served as executive director of the South Dakota Republican Party. “I don’t think she’s ever really shed her establishment mentality, but she’ll shift her views or positions if she sees that someone or an idea is popular. She can very easily transition.”

Noem didn’t agree to an interview request for this story, deferring questions to spokesperson Ian Fury. South Dakota News Watch reached out to political scientists, lawmakers and campaign experts to assess the steps and strategy of the governor’s journey from farm-raised Hamlin County candidate – a former Snow Queen with agricultural business acumen and a compelling personal story – to a prominent figure in South Dakota political history.

One thing is clear: Noem’s pursuit of Republican Party relevance and positions on hot-button issues such as abortion and gun rights make it nearly impossible for state residents not to have strong opinions of her.

“There’s this thing called confirmation bias that says we look for information that fits our previously held beliefs, and we often reject others’ information, or don’t even see it, in the current media environment,” said Michael Card, an emeritus professor of political science at the University of South Dakota. “That beats the heck out of dealing with the vicissitudes of, how do we make sense of all this? It’s a lot easier just to say she’s all good, or she needs to go.”

Though the 50-year-old Noem remains non-committal about aspirations to run for president in 2024 or to make the national ticket as a vice presidential nominee, her national travel and fundraising activities put her in a spotlight, with $7.8 million in her state campaign committee as of the last reporting date. In addition to visiting early Republican primary states such as Iowa, New Hampshire and South Carolina, Noem has held a fundraiser at Trump’s Mar-a-Lago resort in Florida, spoken in Dallas at the National Rifle Association convention and recently appeared in Arizona with GOP gubernatorial candidate Kari Lake, who supports Trump’s baseless contention that he won the 2020 election.

Noem published a book, “Not My First Rodeo,” earlier this year, capitalizing on her political bounce from the summer of 2020, when her hands-off approach to COVID restrictions and criticism of social justice demonstrations endeared her to Trump – who visited Mount Rushmore for Fourth of July fireworks – and led to a speaking slot at the Republican National Convention. Two days after Trump lost the November 2020 election to Joe Biden and started making unfounded claims about voter fraud, Noem complained about “rigged election systems” from her Twitter account.

If Trump runs again in 2024, the lane for Noem is narrow. She has polled around 1% in most national GOP primary polls so far. Her anti-lockdown pandemic stance, which led to regular appearances on Fox News and other conservative outlets, offered a glimpse of a political future beyond South Dakota’s borders.

“Trump is one variable, but I do think COVID matters,” said Jon Schaff, a professor of government at Northern State University in Aberdeen. “When the pandemic hit, her response to it raised her profile. I suspect at that point the idea struck her that maybe she could be a national contender. She was getting a lot of publicity, she’s an ambitious person, she’s a very good politician and fundraiser, so maybe that which seemed implausible or not even on her radar took on some degree of plausibility. So at that point, how does one advance in the Republican Party? You’ve got to be on Team Trump. It’s not the only way, but it’s the easiest way.”

Paving the way was Corey Lewandowski, a former Trump campaign manager who helped orchestrate Noem’s travel schedule, fundraising and messaging on what the governor’s team calls a volunteer basis, but who does not come without baggage.

Lewandowski was charged with misdemeanor battery last year after being accused by a female Trump donor of unwanted sexual advances at a Las Vegas fundraiser also attended by Noem, charges that will be dropped if he follows through on a deal with prosecutors that includes eight hours of “impulse control” counseling. Noem publicly cut ties with Lewandowski soon after the incident but has since welcomed him back to the fold, and he attended a Rapid City event on Sept. 28 at which the governor promised to repeal the state’s grocery tax if reelected, despite opposing such action during previous legislative sessions.

Noem has defended South Dakota’s abortion laws being among the most restrictive in the nation, with no exceptions for rape or incest, despite a recent News Watch poll showing that 76% of respondents support such exceptions. That stance, combined with much-publicized efforts to ban Critical Race Theory-style curricula and transgender sports participation in South Dakota schools, has opened her to criticism of prioritizing nationally resonant GOP issues over more pressing homegrown concerns.

“Governor Noem’s position as a national figure can be a positive for South Dakota,” said Republican Attorney General nominee Marty Jackley, who lost to Noem in a 2018 primary for governor. “But it’s important for anyone in a statewide role not to let national policy set your South Dakota agenda. You need to let South Dakota’s agenda set your national policy.”

South Dakota hasn’t had a politician run for president since George McGovern in 1972, though senators Tom Daschle and John Thune reportedly considered campaigns before turning back. Noem has shown impeccable timing in her career and an ability to close out elections, with a record of 7-0. In that respect, say her supporters, she has been consistent in her approach.

“Kristi got into politics 16 years ago, and we’ve seen this country change a lot in that time,” said Tony Venhuizen, who worked in the Daugaard and Noem administrations and is headed to the state legislature as a Sioux Falls Republican. “I’m not sure that she’s really changed all that much. She has stepped up to the challenge and gone where she felt God was leading her, which meant stepping up into positions that I don’t think she would have ever guessed she would find herself in.”

Get local news delivered to your inbox!