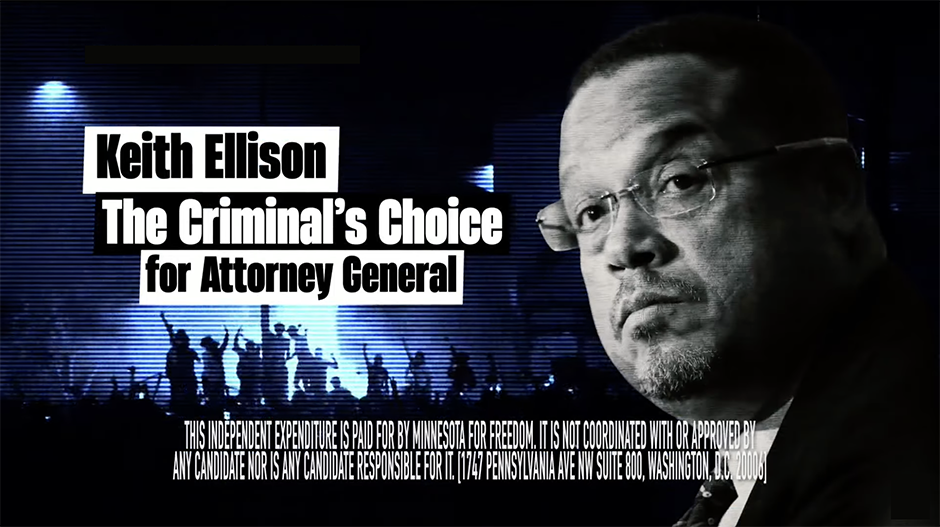 WASHINGTON — Hoping to impact the results of that very close contest, outside money is pouring into the tight race between Attorney General Keith Ellison, a Democrat, and his GOP opponent Jim Schultz.

While most of the money that ends up funding the attack ads come from wealthy individuals, large corporations, big law firms and labor unions across the nation, some of it was raised in Minnesota.

According to filings with the Internal Revenue Service, St. Paul-based 3M and a Wells Fargo subsidiary based in Minneapolis were among the companies that contributed to the Republican Attorneys General Association (RAGA). The association’s super PAC, Minnesota for Freedom, has secured about $1.5 million in ad time to run two ads bashing Ellison, according to filings with the Federal Communications Commission.

While a 527 must report all of its contributors to the IRS, the amount of these contributions are unlimited, and corporations can donate as well as individuals.

The company issued a statement in response to questions about their donations.

“Political contributions are one way we connect with elected officials and political parties to help inform decision-making, support 3M business groups and 3Mers, and promote science-based policies,” the 3M statement said. “We will continue to work in a nonpartisan way to advance our mission of improving every life.”

Jennifer Ehrlich, a spokeswoman for 3M, also characterized the money the company gave to the competing political organizations as “corporate membership dues to attend the associations’ conferences and events.”

But Larry Jacobs, professor at the University of Minnesota Hubert H. Humphrey School of Public Affairs, said companies who give to 527 organizations may present their contributions as dues, but they are in effect “active participants in supporting harsh political ads.”

The Republican Attorneys General Association’s super PAC is running two television ads in Minnesota that accuse Ellison of cozying up to criminals. One features a phone call from an imprisoned individual who tells a potential voter “I want you to know why inmates support Keith Ellison. Keith Ellison supports us.” It ends with script that says “Keith Ellison, the criminal’s choice for attorney general.”

Jacobs said the attack ads, coming from an independent expenditure group that is not allowed to coordinate with any candidate campaign, allows Schultz to dissociate himself from the mudslinging ad.

“The super PACs are set up in a way that is distant from the candidate, and that allows them the freedom to fire away,” he said.

The state’s DFL party has accused the Republican super PAC of violating the restriction that it not coordinate with a candidate’s campaign when it comes to the attack ads targeting Ellison. It’s usually difficult to prove this type of coordination. And in this case it may not matter much because GOP candidates – including Schultz – have taken a law and order stance across the nation in this midterm election and Republican super PACs are quite aware of this.

The Ellison campaign says the ads are divisive.

“Every Minnesotan deserves to be safe and have their wallets and freedoms protected — no exceptions. But Jim Schultz and his wealthy backers are blatantly using fear to try to divide us from each other based on what we look like or where we come from,” an Ellison campaign statement said.

Meanwhile, the ads funded by DAGA’s super PAC portray Ellison as a defender of abortion rights and accuses Schultz as going on “offense” when it comes to abortion. Abortion is a key campaign issue for Democrats who hope that anger at the Supreme Court’s overturn of Roe will drive supporters to the polls.

In any case, whether or not Ellison is “soft on crime” may not be the motivation for RAGA enter the Minnesota attorney general’s race.

Ellison was asked by Gov. Tim Walz to take charge of the prosecution of Minneapolis Police Officer Derek Chauvin for the murder of George Floyd, but his job as attorney general focuses chiefly on protecting state laws and suing – in civil courts – companies and individuals who are accused of doing harm.

With Ellison and other Democratic attorneys general becoming more active in multi-state lawsuits against certain companies, many corporations and trade associations are supportive of the Republican Attorneys General Association. They include several oil and natural gas companies, PhRMA – the trade association for the nation’s drug companies – and the NRA, which is fighting attempts to weaken protections from liabilities Congress inferred on gun manufacturers.

RAGA is also supported by the National Mining Association and the U.S. Chamber of Commerce Institute for Legal Reform, which gave the organization more than $1 million this year and whose No.1 priority is “tort reform” or making it more difficult to win large jury awards in lawsuits against corporations.

Jacobs said Ellison has been “aggressive” in bringing suits against companies accused of harming consumers.

“The Chamber of Commerce does not want an attorney general who will likely sue their companies,” he said.

RAGA did not return a phone call requesting comment.

The Democratic Attorneys General Association receives much of its financial support from lawyers – who benefit from lawsuits against corporations – and labor unions, including the AFL-CIO, which often sues corporations.

So the political stakes when it comes to races for attorneys general are high this year. Both RAGA and DAGA are spending millions of dollars running ads in more than a dozen states besides Minnesota, including Michigan, Colorado, Wisconsin, Texas, New York and North Dakota.

MinnPost’s in-depth, independent news is free for all to access — no paywall or subscriptions. Will you help us keep it this way by supporting our nonprofit newsroom with a tax-deductible donation today?

READER’S EDITORIAL: THE GOP AND GUNS
The Osage Bow Part 6 (Draw Wt and Shooting)
Civil War Camp Food Skillygalee
5 Secret Tips on how to get better at Archery!
Why are There So Many Shootings in America? It’s a Loaded Question | Explained