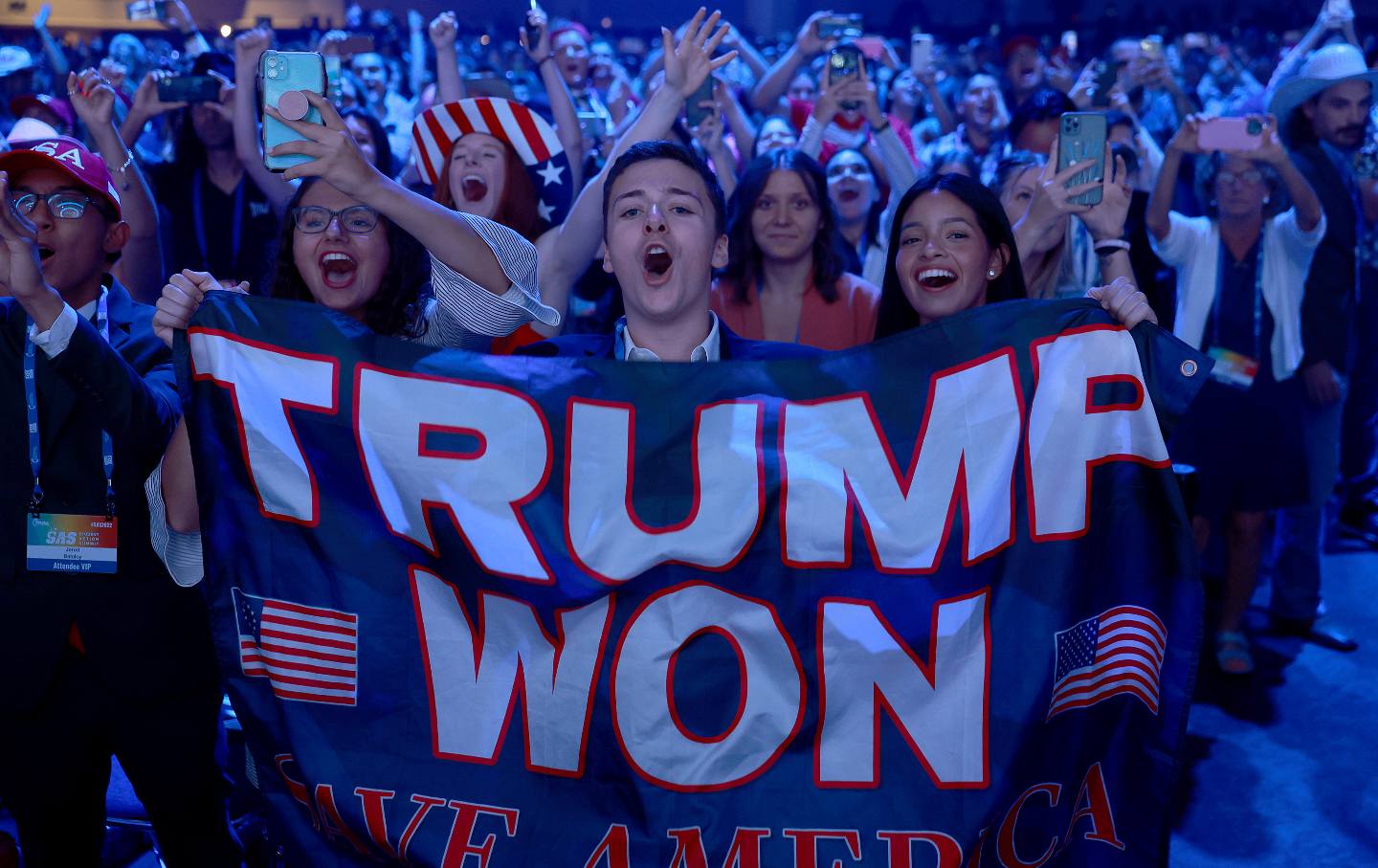 This story was produced for StudentNation, a program of the Nation Fund for Independent Journalism, which is dedicated to highlighting the best of student journalism. For more Student Nation, check out our archive or learn more about the program here. StudentNation is made possible through generous funding from The Puffin Foundation. If you’re a student and you have an article idea, please send pitches and questions to [email protected].

For conservatives, the most frightening place in the country has always been a college campus. By 1964, Students for a Democratic Society had formed chapters at hundreds of universities with tens of thousands of supporters, protesting racism, inequality, and the Vietnam War. After Barry Goldwater’s loss in the presidential election that same year, his young crusaders were worried—and inspired. They began building out conservative political infrastructure independent of the Republican Party to compete for America’s youth.

Paul Weyrich helped found the American Legislative Exchange Council, the Heritage Foundation, and the Council for National Policy. The youngest Goldwater delegate, Morton Blackwell, would eventually become the youth director for Ronald Reagan’s 1980 presidential campaign. But it wasn’t enough to get young people already interested in right-wing causes to vote—they had to be trained. In 1979, Blackwell created the Leadership Institute, a nonprofit that offered workshops, seminars, and employment placement services for over four decades, funneling right-wing students from campus groups into the conservative machine.

Today, alumni of the Leadership Institute include Mike Pence, Project Veritas founder James O’Keefe, Dan Crenshaw, and Mitch McConnell. The Institute claims that Blackwell has likely “trained more political activists than any other conservative”—more than 200,000—with over 1,700 conservative clubs and newspapers on campuses nationwide. But Blackwell is not alone. Turning Point USA, founded in 2012 by millennial Charlie Kirk, aims to “identify, educate, train, and organize students to promote freedom” with donations from the Bradley Foundation and various Koch-affiliated groups. According to The Guardian, TPUSA’s revenue increased from around $4 million in 2016 to almost $40 million in 2020. Meanwhile, beginning in 2005, the libertarian Koch brothers Charles and David spent almost half a billion dollars on university and higher education nonprofit grants in an effort to push free-market ideas and integrate more students into their network.

In Raising Them Right, Kyle Spencer charts the rise of the country’s ultraconservative youth from the 1960s to January 6. In the following interview, Spencer and I talk about this movement, what political debates actually look like on campuses today, and how the left can learn from the conservative playbook. This conversation has been edited and condensed for clarity.

ulian Epp: What made you want to write this book?

yle pencer: I was writing about education for The New York Times and Politico, as well as researching for Frontline and for various other documentary makers, on and off college campuses. I started to get wind of a lot of gun rights activism and got in touch with folks who were pushing for campus carry laws to be passed in their states. They were effective. Particularly in 2017 to 2018, you were seeing the states passing—or at least seriously considering—these bills. I didn’t buy that they were doing it on their own, so I started investigating. Lo and behold, I discovered that the NRA—and the more radical Gun Owners of America—were funding, supporting, aiding, and training these activists.

These guys were really the face of a much larger, adult movement. I figured if the gun rights movement is funding young students on campuses, there must be other conservative groups doing it too. And then I went down the rabbit hole. Conservative groups were pumping millions and millions of dollars onto college campuses in the efforts to recruit young people.

JE: But many of these movements started taking shape long before 2017, as you show in the book, even for the current generation of conservative youth. In what ways did you see Barack Obama’s campaign and presidency inspiring today’s young right?

KS: The movement was really a reaction to Obama-ism. He’s often referred to as “the social media president,” because he really did pioneer a lot of ways that politicians would use the Internet to spread their message. Conservatives saw this—Charlie Kirk, in particular—and decided, “Hey, I need to catch up and do this for my side. I want to figure out a way to manipulate the Web and to utilize social media to spread conservative messaging.”

But when Charlie Kirk started building his following, he was really talking about economics. He was obsessed with trade, China, and the national debt. He was actually really concerned about student debt too. In his early movement, it was all about small government, because those were popular conservative talking points during that period. Of course, George Bush conservatism morphed into Trump conservatism, which has really been much more about the culture wars, and has had very little to do with small government.

JE: How does the new young right use the culture wars and controversy to their advantage?

KS: Charlie is very good at reading tea leaves and figuring out the zeitgeist, so the movement that ended up getting him a lot of attention was his “Socialism Sucks” campaign. Once the young conservatives began to latch onto the culture wars—and particularly around the idea of “free speech”—they really started to gain traction. They spread this idea that young conservatives were not allowed to speak on college campuses.

If you send that message enough, and then present yourself as the antidote, that’s pretty powerful. There’s this idea that every university is a small liberal arts college where no one’s allowed to say anything. Of course, there are campuses that are pretty radical politically, but I would argue that even those campuses allow more dissent among students than the right-wing—and sometimes even the left-wing—media lets on.

At a big state school, you get everything—people trying to convert you to evangelicalism, to libertarianism, everything, right? This idea that they’re being denied the right to speak is just untrue. At a lot of campuses nowadays, the loudest and most radical voices are from right-wing students who are getting funded. They’re putting down tables, handing out expensive swag, and holding meetings where they can afford to offer food and other activities. If I was agnostic and I walked around these campuses, and saw the pro-life table versus the pro-choice tables, I would want to hang out with Turning Point USA because they always thought they were having more fun.

JE: Over the past few years, Turning Point became the fastest-growing youth activist group in GOP history. In 2020, a third of voters under 30 voted for Trump—not a winning margin, but still pretty sizable. And, as you say, young conservatives are louder and more organized than they have been in decades. The people that believe there are no conservatives on college campuses haven’t visited one in the last five years or so.

KS: I’m so glad you say that, because I hear this all the time. There’s a misunderstanding of the number of young people who actually voted for Trump. People think that 90 percent of college students are Democrats, but that’s not true. White males are a big target for these young activists on these campuses.

JE: So in what way is the book a warning to Democratic politicians and activists who think that young people are a given for the party?

KS: Right now, the Democratic Party really does not appreciate its young activists. Meanwhile, the Republican establishment has built a relationship of financial support, training, guidance, trust, and friendship. There were moments in which it was quite endearing—these older people sharing their values with younger people, helping them to hone their message, and teaching them how to become representatives for their cause. On the Democratic side, you see mistrust, lack of funding, disrespect—total dysfunction. What I tried to show in my book is that the Democrats need to develop a closer, tighter bond with their young activists.

JE: You talk about how, after the Goldwater defeat, Morton Blackwell and the emerging New Right looked at what left movements had that the right was lacking, and they saw a history of grassroots activism. Charlie Kirk, as you mentioned, was interested in how Obama’s presidential campaign used his social media presence. Similarly, Cliff Maloney and Young Americans for Liberty were inspired by Run for Something and Tom Steyer’s NextGen America. What should the left be copying from the conservative model?

KS: There’s a lot to be taken from the Republican playbook, but there’s a lot we cannot take. One of the reasons that younger conservatives have these tight bonds with older conservatives is that they are much more comfortable with hierarchy and authority—the old adage that “Democrats fall in love, Republicans fall in line.” Once Trump was the leader of the party, people put aside their own personal belief systems and just got behind this guy.

We don’t want to be blindly comfortable with authority. We do value individualism. But what the Democrats can learn is that when you see young people who may seem a little more radical than the establishment, that shouldn’t be a reason to throw them out. There has to be more openness to building a coalition of people with differing ideas. I never want to create a false equivalency between progressives—who fight or for a better economy, for young people, for the environment—and conservative insurrectionists. But inside the Democratic Party, they’re only talking about degrees of discomfort. “That’s too fast. They’re too radical. They care too much about the environment. They’re scary.” That is not effective. These are the Democrats young activists—they are the foot soldiers. To turn them away doesn’t make any sense.

JE: Right. The young conservatives enamored with Goldwater were taken in and trained. Sixty years later, they are the octogenarians running the GOP.

Now, the training academy for the Leadership Institute is encouraging people to run for their school boards. Turning Point’s political arm is telling young people to become candidates for local office. The job is always to infiltrate and get ultraconservative representatives in every corner of government. Mitch McConnell is not the master strategist by mistake—he was taught. It happened because it was laid out. It was set up. It was coordinated. It was funded.