(RNS) — Polls show younger Americans are a lot more liberal than older Americans. But over the past decade, Republicans, aided in large part by major white evangelical donors, have invested heavily in building a well-organized conservative youth movement to lure young people — especially college students — to the right.

Kyle Spencer, a longtime journalist who has reported about education for The New York Times and Politico, has now written a book on the effort. “Raising Them Right: The Untold Story of America’s Ultraconservative Youth Movement and its Plot for Power” probes the  key players and their tactics.

Leading this nascent movement is Turning Point USA founder Charlie Kirk and talkshow host Candace Owens (and, to a lesser extent, libertarian organizer Cliff Maloney). In her book, Spencer describes their backgrounds, their knack for self promotion and their rapid ascent to the top echelons of Republican politics. Both Kirk and Owens became fixtures of former-President Trump’s inner orbit. Later they backed Trump’s Big Lie efforts, becoming the shock troops for the post-election misinformation campaign. Turning Point USA sent some 350 people to Trump’s speech at the Ellipse on Jan. 6, where he urged his supporters to march on the Capitol as Congress was certifying the 2020 election results. (Kirk, who was not there and said he didn’t support the attack on the Capitol, nevertheless said the insurrectionists’ rage was understandable.)

Both Kirk and Owens grew up Christian and have publicly and vocally embraced an evangelical identity. Kirk founded TPUSA Faith, whose mission is to “engage, equip, and empower Christians to change the trajectory of our nation.” His podcast airs on the conservative Christian radio outlet, Salem Media.

RNS spoke to Spencer about her book and what this growing movement of young conservatives may bode for the future. The interview was edited for length and clarity.

How did you get into this?

I was off and on college campuses and I was starting to come across young gun-rights advocates who were tabling and pushing campus-carry legislation. When you talked to them they said they were doing this on their own. I just didn’t believe that. I started looking at budgets and annual reports. And lo and behold, I discovered the NRA and Gun Owners of America were pumping millions of dollars on college campuses for pro-gun policies. Then, I thought, if gun rights groups are doing this, so are conservative groups. I found pro-life groups, anti-climate groups, libertarian groups. They were all pumping tons and tons of money onto college campuses. Then I went to the Leadership Institute, which serves as a clearinghouse for all these groups. That’s where I learned how organized they were. Kyle Rittenhouse, right, is introduced to a cheering crowd by Charlie Kirk, middle, founder of Turning Point USA, at a panel discussion at the Turning Point USA America Fest 2021 event, Monday, Dec. 20, 2021, in Phoenix. The panel discussion, called “Kenosha On Camera,” comes a month after Rittenhouse’s acquittal on charges in the deadly Kenosha shootings in 2020. (AP Photo/Ross D. Franklin)

Did Charlie Kirk go through those programs?

I’m not sure he trained there. But everyone who works for him went through the Leadership Institute. They bring those trainers to their conferences, their campuses. They’re really embedded inside these groups.

How religious was Charlie growing up?

His family went to church, and in high school he joined a local evangelical church. He admired Joel Osteen and quoted him and recommended him to friends. He told people early on he wouldn’t have sex until marriage, and he wasn’t a drinker. His faith is integral to his understanding of how the world works or ought to work. Some of his first donors, Allie Hanley and (the late Wyoming businessman) Foster Friess, are very religious. He realizes pretty early on, these evangelicals are a good donor base for him. Turning Point USA looks secular, but inside the organization the vast majority are Christian. Eventually Turning Point moves to Arizona, and then the organization is led by Tyler Bowyer, who is Mormon, and now a lot of Mormons are working for Turning Point USA.

Where do their tactics of rage and mockery come from? Does the Leadership Institute teach that?

The Leadership Institute’s goals are to win and to do anything you need to win. The mockery and inciting and making fun of progressive students is baked into the structure and the schema of winning hearts and minds. That was always the case. The thing with Trump is that he got mean and encouraged kids to be mean. He enabled people to find their inner bully and capitalize on it. It’s rooted in resentment and anxiety that college students don’t feel they belong or can’t be heard. Then they’re taught, OK, here’s a way you can fight back. Find ways to make fun of them. They teach them to weaponize their phone. Every time you find a progressive acting wacky, get it on video. We’ll edit and slap it up. The Leadership Institute has a publication called Campus Reform, which is a vehicle to push this idea that conservatives on college campuses have no free speech.

Do these tactics ever conflict with their religious values?

They say we’re in a holy war. If you’re in a holy war, the ends justify the means. Radicalism is the way to do this. Your way of life is so at risk, the secular world is so dangerous, you need to fight it any way you can. 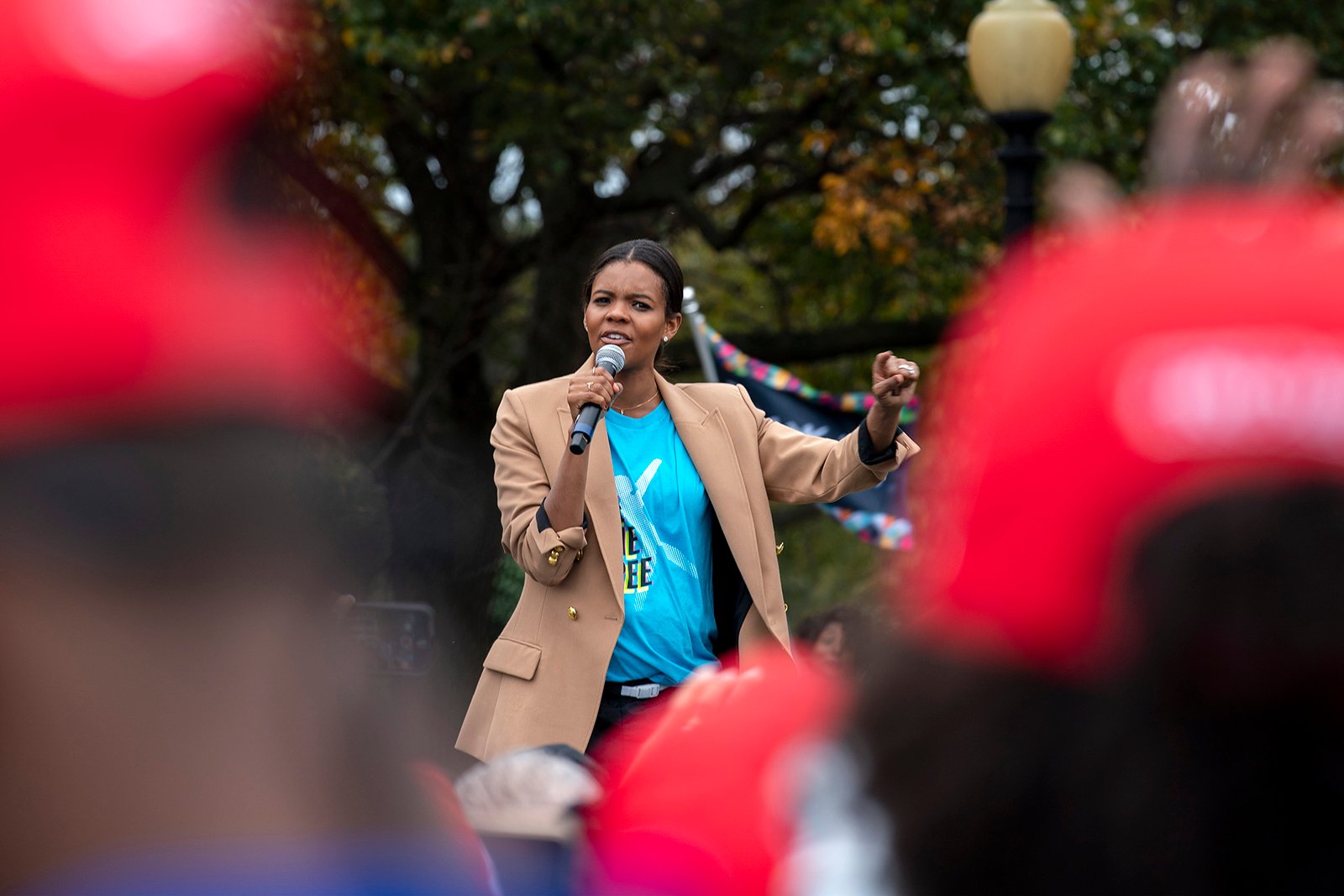 Conservative commentator and political activist Candace Owens speaks during a rally on The Ellipse at the White House on Saturday, Oct. 10, 2020, in Washington. (AP Photo/Jose Luis Magana)

How important was Christianity to Candace Owens growing up?

Her grandfather and grandmother raised her, and they were very religious. They read the Bible at the table. She left for college and then dropped out and moved to New York. She let her religious beliefs fall by the wayside. She picked them up again when she joined the conservative movement. She tells the story at Liberty University. There’s a video of her telling her fall from grace story and her rebirth, and it’s very compelling. She starts crying. Then she married a really religious guy, George Farmer.

You write that neither Charlie Kirk nor Cliff Maloney had a very high opinion of Trump initially. They changed their minds in a kind of opportunistic way, right?

One of the things Trump offers people is a lot of access. As long as you don’t have a falling out with him, you get a lot of perks. There’s no cost of entry, except your soul. You don’t have to have a law degree or a lot of knowledge. That’s alluring. Also, Republicans fall in line. They’re not uncomfortable with authoritarianism and hierarchy. They do follow their leader. They see political leaders as vessels. If you think about it that way, it can excuse a lot.

What’s striking is that for all their work on college campuses, neither Charlie Kirk nor Candace Owens has a college degree.

Charlie talks all the time about how college is a waste of money and a waste of time. He thinks that if you want to get an engineering degree or a law degree that’s fine. But if you want to get a liberal arts degree, don’t do it. College is a scam. It benefits overpaid professors. Classes are biased. The student body is woke and intolerant. He describes them as “islands of intolerance.”

You describe the conservative youth conferences as these rowdy, raucous events where you find wine corks in the bathroom and drunk 20-somethings at the pool. How did they evolve?

When the conservative movement was building up, it understood people needed to convene. The youth groups started having their own conferences, too. In the last 10 years they’ve become raucous parties. As the conservatives have become more celebrity conscious and have been working on building their own shadow Hollywood, they started to see these events as ways to push out celebrities and personalities and to turn them into these Lollapalooza festivals for the right. The energy is very intense. They would get into these long lines to meet Rudolph Giuliani or Dinesh D’Souza. They lionized these people. These speakers are like ministers. They get the room crazy. They’re something between concerts and revivals.

You suggest in the book that Charlie has his own political ambitions.

I don’t know whether he wants to be the next Rush Limbaugh or president of the United States. But his ambitions know no bounds. We’re not done with Charlie Kirk. He’s not going away. He’s just going to be more central to the story of Republicans in America.

RELATED: Poll: Nearly half of Americans think the US should be a Christian nation