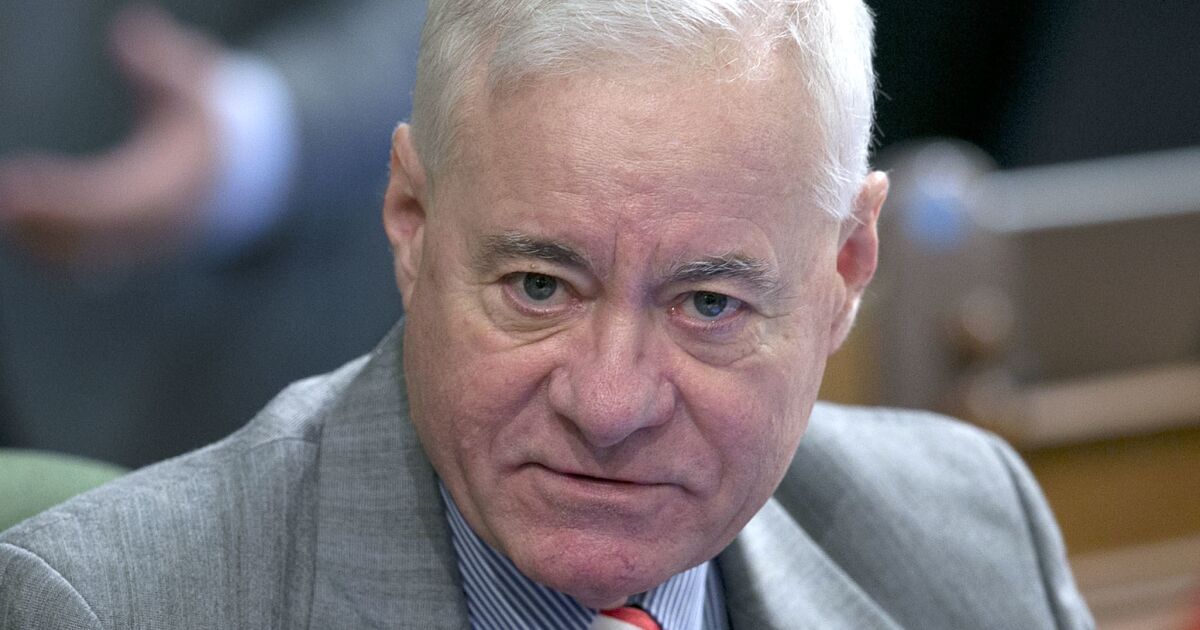 This wasn’t the first shooting to hit home for Randy Voepel.

In March 2001, a teenager opened fire in Santee’s Santana High School, killing two and wounding more than a dozen. Voepel, a Vietnam veteran, had recently been elected mayor of the East County city.

“My third tour in Vietnam was the Santana High School shooting,” he said years later at a memorial service. “All we could do now is pray to God and remember our kids.”

Voepel is a member of the state Assembly, representing Southern California’s 71st District, and this week his grandson was accused of opening fire inside an LGBTQ nightclub in Colorado Springs, Colo.

Anderson Lee Aldrich, 22, was arrested after five people were killed and an additional 17 shot. He now faces murder and hate crime charges.

Much remains unknown. There is no known link between the alleged shooter and his relatives’ beliefs, nor is it clear how well he knows his grandfather. A legislative aide said Voepel hadn’t talked to his grandson in years.

Nobody answered the door at Voepel’s Santee home Monday, and the lawmaker has not responded to requests for comment.

At the same time, the shooting has drawn renewed attention to Voepel’s record opposing pro-LGBTQ proposals and his history of incendiary comments on a range of topics — including his apparent praise of the deadly Jan. 6 attack on the U.S. Capitol, which he likened to the American Revolution in comments to The San Diego Union-Tribune.

In interviews, Santee residents and former colleagues alternatively described Voepel as a man committed to his neighborhood and a voice for the hard right.

Some observers connected this weekend’s bloodshed to broader attacks on LGBTQ people’s rights around the country.

“It’s this toxic combination of hateful rhetoric and lies about LGBTQ people, along with opposition to common-sense gun legislation,” said Sam Garrett, a spokesperson for Equality California, a leading LGBTQ rights advocacy group. Some right-wing politicians have tacitly encouraged violence by “demonizing” members of the community, he said.

Voepel appears to have been less outspoken on gay rights than other topics, and Garrett was not aware of any inflammatory comments from the lawmaker on this issue.

Voepel has voted against LGBTQ legislation.

He recently opposed bills to let transgender Californians update the names and genders listed on their marriage licenses and children’s birth certificates and make it easier for LGBTQ people to take leave from work to care for loved ones.

Equality California has given him grades of 50 out of 100 in recent legislative scorecards, akin to what other Republicans in the Legislature received.

A photo of Voepel also appears on the homepage of the Judeo-Christian Caucus, an organization that lobbies against what it calls “LGBT indoctrination.”

Voepel has similarly opposed gun control measures, earning him an A rating from the National Rifle Association.

He voted no on legislation that makes it easier to sue firearm manufacturers, a ban on advertising guns to minors and restrictions on parts used in “ghost guns” that lack serial numbers.

All of those bills became law.

A Missouri native, Voepel joined the U.S. Navy during the Vietnam War. He was once stationed in San Diego and served on the guided missile destroyer Buchanan, according to military records first obtained by NBC San Diego. He was also awarded the Combat Action Ribbon, records show.

His service led to post-traumatic stress disorder, he told the Los Angeles Times.

“We suffer for the rest of our lives,” he said. “I use humor and hubris to make up for it.”

Voepel and his wife, Susan, raised two children in Santee, according to his official biography.

He was elected to the Santee City Council in 1996, pulling in thousands more votes than the next challenger, municipal records show. While his margin of victory was closer four years later in his first mayoral campaign, Voepel went on to dominate local politics for more than a decade.

“He was always looking out for the best intentions of the city,” Jack Dale, a former mayor who overlapped with Voepel on the council, said Monday in a phone interview. “I just feel awful for him.”

The city has significantly more registered Republicans than Democrats — although even the GOP sometimes felt too “liberal” for Voepel, as he told the Union-Tribune in 2010.

“I have a very hard-nosed viewpoint, a very conservative viewpoint,” he once said to a reporter with Voice of San Diego. “Some people say it’s very un-Christian, but I am a Christian.”

In the same 2007 interview, he opposed investing in homeless outreach (“The more homeless programs we fund in Southern California, the more people come here and be homeless”) and said climate change was good because it would increase temperatures in countries south of the United States, and “our enemies are on the Equator.”

He doubled down on that sentiment years later. “Most of the Muslim nations are in the hot areas of the world,” he said in a 2016 interview with the Times.

Santee has long been accused of harboring racists, although current leaders say that’s an undeserved or outdated reputation. Voepel also pushed back against those allegations.

“Every time I’ve talked to anyone about Santee, I’ve told them we’re becoming a very cosmopolitan city,” he said.

While mayor, he sometimes clashed with residents.

Stephen Houlahan successfully ran for a council seat in 2016, at the end of Voepel’s tenure, after fighting with leaders over a proposed power plant in Mission Trails Regional Park. On Monday, Houlahan criticized Voepel’s leadership and said the city had been hurt by the former mayor’s “extremist views.”

Voepel has weighed in on many hot-button issues.

The American Lung Association repeatedly gave Santee an “F” for not increasing limits on public smoking, but Voepel reportedly dismissed those concerns by saying the grade stood for “Freedom.”

More recently, he called the Jan. 6 insurrection at the U.S. Capitol a “Lexington and Concord” moment that represented the “first shots fired against tyranny.” He later tweeted that he condemned violence and lawlessness.

During his tenure as mayor, Santee also built strong ties with the military. The city “adopted” nearby Marine units and hosted parties for troops, a partnership that continues.

Nobody challenged Voepel for Santee’s top job in 2004 and he didn’t step down as mayor until 2016 when he was elected to the Assembly.

He lost his most recent re-election bid to another Republican incumbent after redistricting drew them into the same seat.

One of Voepel’s neighbors, a Colorado native who asked his name not be used, said he was deeply affected by the shooting because a relative is an LGBTQ liaison with the Denver Sheriff’s Department.

The Los Angeles Times contributed to this report.