Several people were killed in a shooting in a Walmart store on Tuesday night in Virginia state of US. The gunman was also killed during the shooting. This comes after a 22-year-old gunman opened fire with a semiautomatic rifle inside a gay nightclub in Colorado Springs on Saturday, killing five people and leaving 25 injured before he was subdued by “heroic” patrons and arrested by police who arrived within minutes.

It is one of several major mass shootings in the United States this year, including those at the University of Virginia that targeted football players, a Fourth of July parade in Highland Park, Illinois, a hospital in Tulsa, Oklahoma, and an elementary school in Uvalde, Texas.

But why does gun violence persist in the US?

Some call gun violence in America an epidemic in its own right. And they may not be wrong.

According to a Vox report, no other high-income country has had such a high number of people killed by gun violence. Every day, more than 110 Americans are killed by a gun, including suicides and homicides, for a total of 40,620 deaths per year, the report states, citing research, and adds that since 2009, there have been an annual average of 19 mass shootings, which are defined as shootings that kill at least four people. The gun homicide rate in the United States is up to 26 times that of other high-income countries, and the gun suicide rate is nearly 12 times higher. People sit along the fence outside of the White House as it is lit up orange in recognition of National Gun Violence Awareness Day in Washington, U.S., June 3, 2022. REUTERS/Leah Millis

The report states that although gun opponents blame the shootings as a symptom of a ‘mental health crisis in America’, the problem is not unique to the US, and a more practical reason behind the shootings in the civilian gun ownership rates.

CNN reports that obtaining a precise picture of gun ownership rates in the US is difficult because there is no definitive database of gun sales. The only data there exists are of polls and survey results from think tanks and academic researchers, which vary slightly in their estimates. Nonetheless, some broad trends stand out.

According to an estimate from the Small Arms Survey, a Swiss-based research project, there were approximately 390 million guns in circulation in the United States in 2018, or approximately 120.5 firearms per 100 residents, Vox reports. Given that one in every five households purchased a gun during the pandemic, that figure is likely to have risen in the years since. Even after accounting for that increase, the United States has far more guns than any other country: Yemen, which has the world’s second-highest level of gun ownership, has only 52.8 guns per 100 residents, while Iceland has 31.7. Bill Mosley walks with his wife Bonnie while carrying two of his guns, the only items he was able to recover after their home was destroyed, as a devastating outbreak of tornadoes ripped through several U.S. states in Earlington, Kentucky, U.S. December 11, 2021. REUTERS/Cheney Orr

While earlier this year Congress reached a deal on limited gun reforms, America’s gun culture is deeply embedded in its heart and may be hard to eradicate.

People own guns for a variety of reasons, and the majority of gun owners say they own a gun for more than one reason.

The vast majority of people are motivated by protection. According to a Gallup poll conducted in October 2021, 88% of gun owners cited crime prevention as a reason for owning a gun, while 70% cited target shooting and 56% cited hunting as reasons. Similarly, Pew found that two-thirds of gun owners cited protection as a major reason for owning a gun, while about four in ten cited hunting and three in ten cited sport shooting. According to research, roughly three-quarters of gun owners see firearms as important to their freedoms, while roughly half see them as important to their identities. 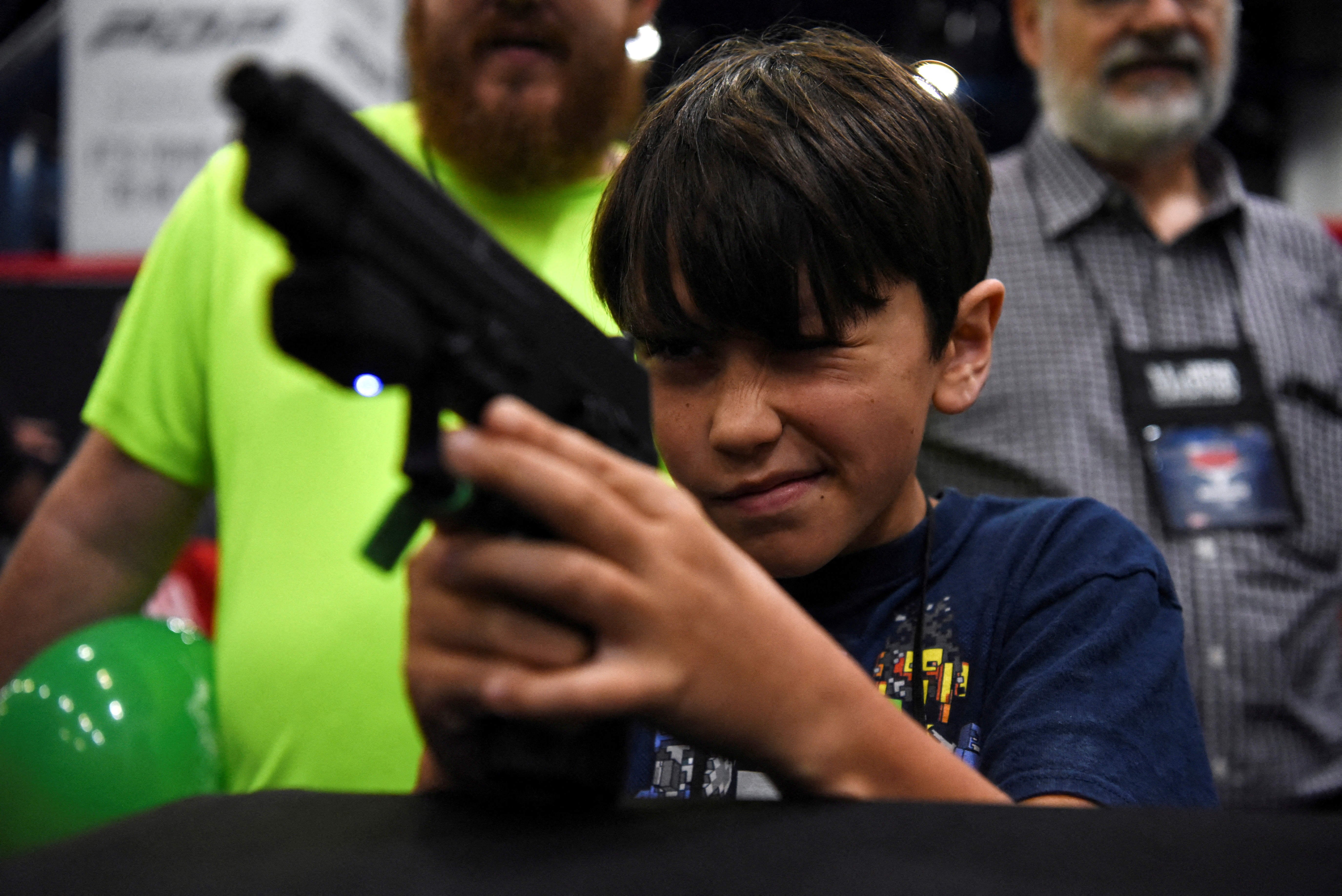 A child engages in virtual target practice as attendees try out the guns on display at the National Rifle Association (NRA) annual convention in Houston, Texas, U.S. May 28, 2022. REUTERS/Callaghan O’Hare

According to Pierre M Atlas, who is a senior lecturer, Paul H. O’Neill School of Public and Environmental Affairs, Indiana University, the mythology of the “Wild West,” which romanticises guns, outlaws, rugged individualism, and the inevitability of gun violence, is central to American gun culture.

Americans have owned firearms since colonial times, but the imagery, icons, and tales – or mythology – of the lawless frontier and the Wild West really took off after the Civil War, the report explains. Frontier mythology began with 19th-century Western paintings, popular dime novels, and travelling Wild West shows by Buffalo Bill Cody and others, and exaggerates the number and significance of gunfights and vigilantism. It continues to this day with Western-themed shows like “Yellowstone” and “Walker” on streaming networks.

Pamela Haag, a historian, attributed much of the country’s gun culture to the Western theme. Guns were common in American society before the middle of the nineteenth century, she writes, but they were unremarkable tools used by a diverse range of people in a growing nation.

However, gun manufacturers Colt and Winchester began marketing their firearms to customers by appealing to their sense of adventure and the romance of the frontier. Gun manufacturers began advertising their guns in the mid-nineteenth century as a way for people all over the country to connect with the excitement of the West. Winchester’s slogan was “The Gun That Won the West,” but Haag contends that it was “the West that Won the Gun.”

By 1878, this theme had become so popular that Colt’s New York City distributor suggested marketing the.44-40 calibre version of its Model 1873 single-action revolver as the “Frontier Six Shooter” to capitalise on the public’s growing interest in the Wild West.

The Link Between Gun Ownership and Gun Violence

Researchers have discovered a clear link between gun ownership and gun violence in the United States, and some argue that it is causal, Vox explains. According to one 2013 Boston University-led study, for every percentage point increase in gun ownership at the household level, the state firearm homicide rate increased by 0.9 percent. According to a January study by the gun control advocacy group Everytown for Gun Safety, states with weaker gun laws have higher rates of gun-related homicides and suicides.

The relationship between gun deaths and gun ownership is far stronger than the relationship between violence and mental health problems. According to a study by Duke University professor Jeffrey Swanson, who studies policies to reduce gun violence, if all schizophrenia, bipolar, and depressive disorders could be cured, violent crime in the United States would fall by only 4%.

Access to firearms in the United States is governed by a number of federal statutes. These laws govern the production, sale, possession, transfer, record keeping, transportation, and disposal of firearms, ammunition, and firearms accessories. State agencies and the federal Bureau of Alcohol, Tobacco, Firearms, and Explosives enforce them (ATF). In addition to federal gun laws, every state and some local governments have their own laws governing firearms.

The Second Amendment to the United States Constitution protects the right to keep and bear arms, though there was a lack of clear federal court rulings defining the right until the United States Supreme Court ruled in District of Columbia v. Hellerstedt that it protects any individual’s right to keep and bear arms unconnected with militia service for traditionally lawful purposes, such as self-defense within the home, in District of Columbia v. Hellerstedt (2008). This was followed by the Supreme Court’s affirmation in McDonald v. City of Chicago (2010) that the Second Amendment is incorporated by the Fourteenth Amendment’s Due Process Clause and thus applies to both state and local laws as well as federal laws.

While the majority of Americans support stricter gun laws, including universal background checks, a vocal Republican minority strongly opposes such legislation — and is willing to put pressure on GOP lawmakers to do the same. This group of voters, along with the NRA and a well-funded gun lobby, sees gun control as a deciding issue, one that could lead to a primary challenge for a lawmaker who votes for it.

The gun lobby has an advantage in terms of enthusiasm. Despite being outnumbered, Americans who oppose gun control are more likely to contact public officials about it and base their votes on it, according to Matthew Lacombe of Barnard College in 2020.

For the first time since the 1990s, Congress passed a bipartisan gun safety bill in June. However, the new law, which encourages states to pass red flag laws, strengthens background checks for gun buyers under 21, and closes the “boyfriend loophole,” which allowed some people with domestic violence convictions to purchase guns, is insufficient to address the root causes of mass shootings. According to some studies, even truly universal background checks may have limited effects on gun violence.

Read all the Latest Explainers here