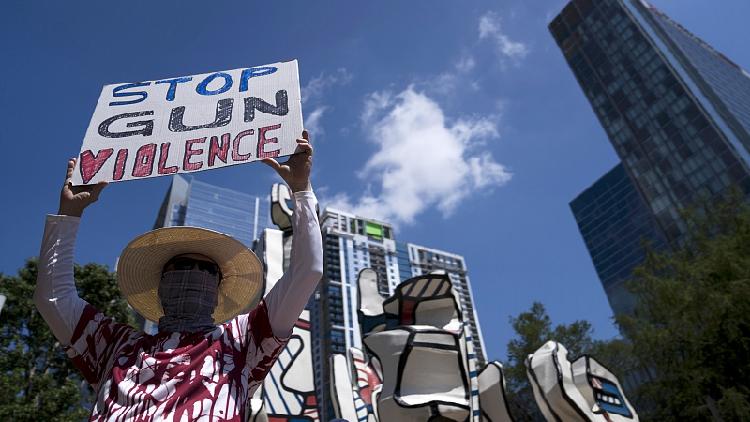 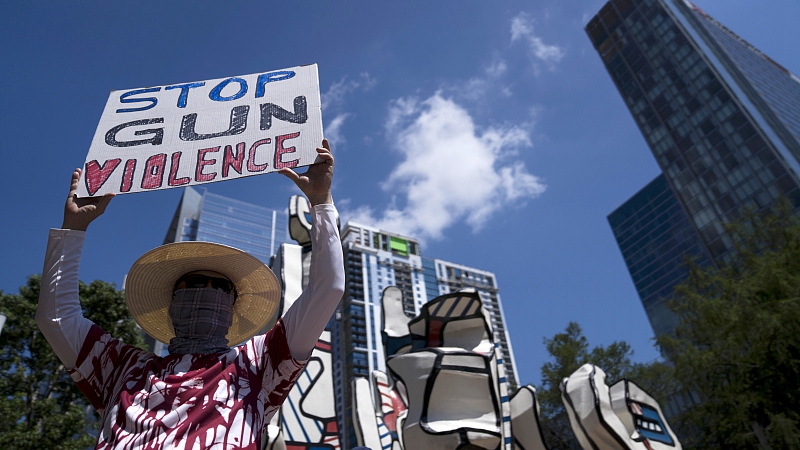 Gun control advocates hold signs during a protest at Discovery Green across from the National Rifle Association Annual Meeting at the George R. Brown Convention Center in Houston, Texas, the U.S., May 27, 2022. /CFP

Gun control advocates hold signs during a protest at Discovery Green across from the National Rifle Association Annual Meeting at the George R. Brown Convention Center in Houston, Texas, the U.S., May 27, 2022. /CFP

Editor’s note: Bradley Blankenship is a Prague-based American journalist, political analyst and freelance reporter. The article reflects the author’s opinions and not necessarily the views of CGTN.

Just ahead of Thanksgiving break, four Overbrook High School students were shot in West Philadelphia after being dismissed from school. There were also a series of mass shootings this month on college campuses, at a Virginia Walmart and at a nightclub in Colorado Springs, Colorado. According to reports, the past week alone has seen 24 lives lost and 37 others injured across seven states, accounting for more mass shootings than days in the year.

In fact, the last three years alone have seen over 600 mass shootings and this year is on pace to reach 675, which would be the second-highest total ever after 2021. There are an average of 1.86 mass shootings per day so far this year, according to data by Gun Violence Archive. The average has sat above 1 per day since 2019, with a peak of 1.9 last year in 2021.

This year, gun deaths became the leading cause of death for children and young adults in the United States – surpassing motor vehicle deaths and other accidental injuries. Compared to other countries in the Organization for Economic Co-operation and Development (OECD), the U.S. is the only country where guns are the leading cause of death for people aged 1-19. In fact, no other country even has guns among its top four leading causes of death. Guns account for about 20 percent of all deaths among this age group in the U.S., which is a truly harrowing figure.

Much of this wanton violence is ideologically motivated. Right-wing extremism is responsible for an estimated 74 percent of all politically-motivated attacks while the left is responsible for 2 percent. Left-wing extremism is in decades-long decline while right-wing terrorism has risen since former President Barack Obama’s tenure and surged during former President Donald Trump’s term. About one in three domestic terror attacks are known to have come from the far-right. 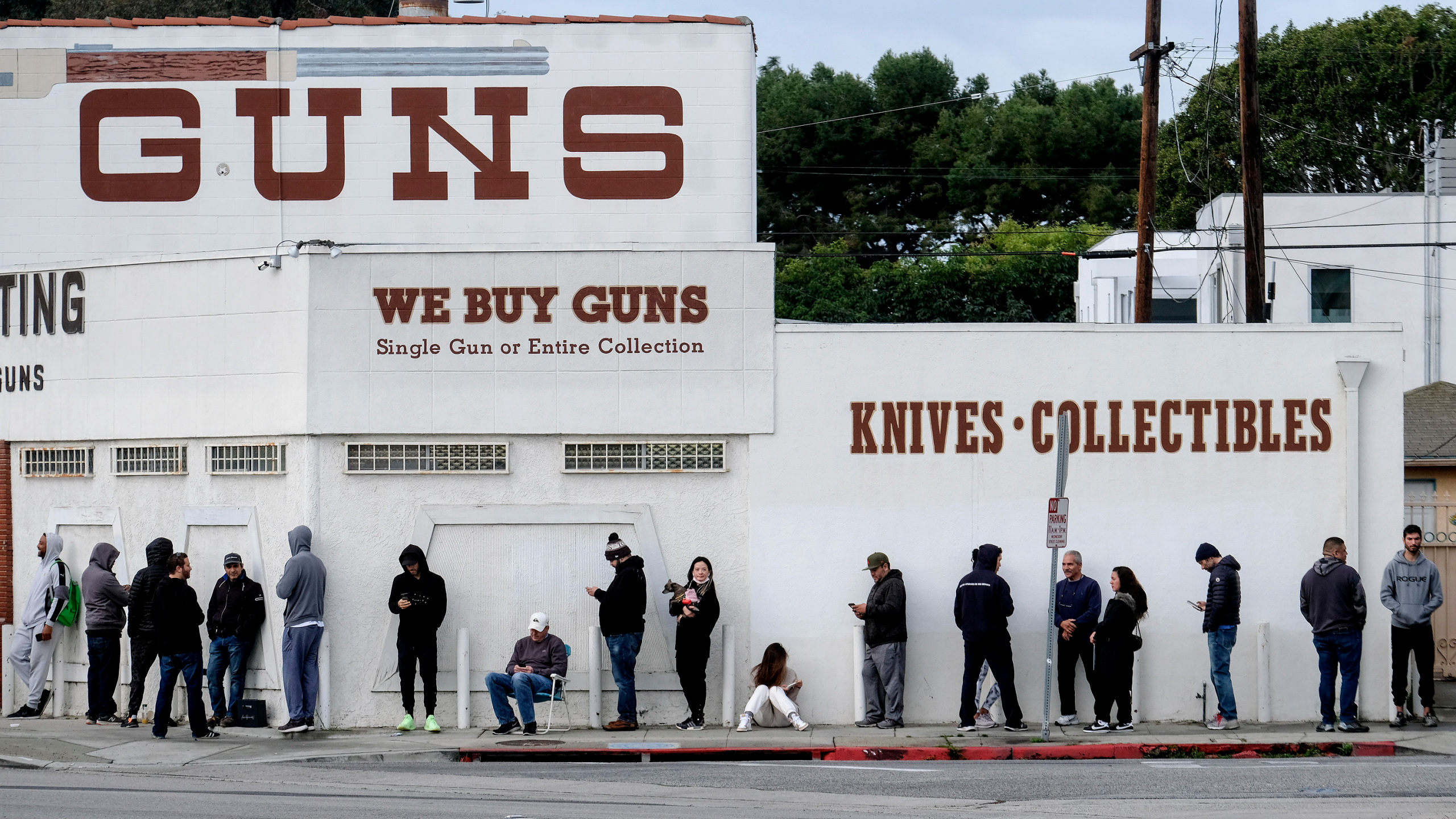 The United States faces a complex issue where hate is festering while guns are easily accessible. If more guns equaled more safety, the United States would be the safest country in the world. That it has a homicide rate far exceeding any other peer country indicates that guns are a threat to society. There are estimated to be about 400 million guns in the hands of private citizens, which is an unthinkable number for most countries.

The prospects that any meaningful legislation will pass to control the accessibility of weapons look to be nil as Republicans take control of the House of Representatives. President Joe Biden said on Thanksgiving that allowing “semi-automatic weapons to be purchased is sick” and that doing so only enriches gun manufacturers. Biden promised to introduce an assault weapon ban before the new Congress takes office, but there’s almost no chance it will garner enough votes in a bitterly divided Senate to pass.

So, in effect, the status quo of easy access to firearms will continue despite any pushback from the White House. This will only agitate the existing issue of gun violence, funneling more weapons to the streets for people to use in sadistic acts of mass murder. The explanation is obvious: guns are driving gun crime. Still, experts are trying to keep the gun debate alive despite the fact that it has long been over. Americans are so desensitized to violence that statistics aren’t enough to capture the situation.

As stated before, the leading cause of death for people in the U.S. aged 1-19 is guns. About 20 percent of people in this age group die from guns. And no other country comes anywhere near this figure. A country that has decided that the lives of its youth are worth less than access to guns made its decision a long time ago. This figure would horrify any ordinary civilized society – but not the United States, apparently.

The fact is that stricter gun regulations mean that there would be fewer gun deaths. This is evident by the declining gun deaths that followed the implementation of the so-called Brady Bill in the 1990s, which instituted a waiting period for the purchase of hand guns and background checks for firearm purchases from vendors. This was successful in reducing suicides in older age groups – but it’s time to implement even stricter legislation, such as the House’s assault weapon ban that passed this summer but was sidelined in the Senate.

We had previously seen a similar ban passed in 1994 that was successful in reducing gun violence but expired in 2004 after failing to be renewed. Without banning assault weapons, countless more young American people will die in mass shooting events that are happening with increasing frequency.

(If you want to contribute and have specific expertise, please contact us at opinions@cgtn.com. Follow @thouse_opinions on Twitter to discover the latest commentaries in the CGTN Opinion Section.)