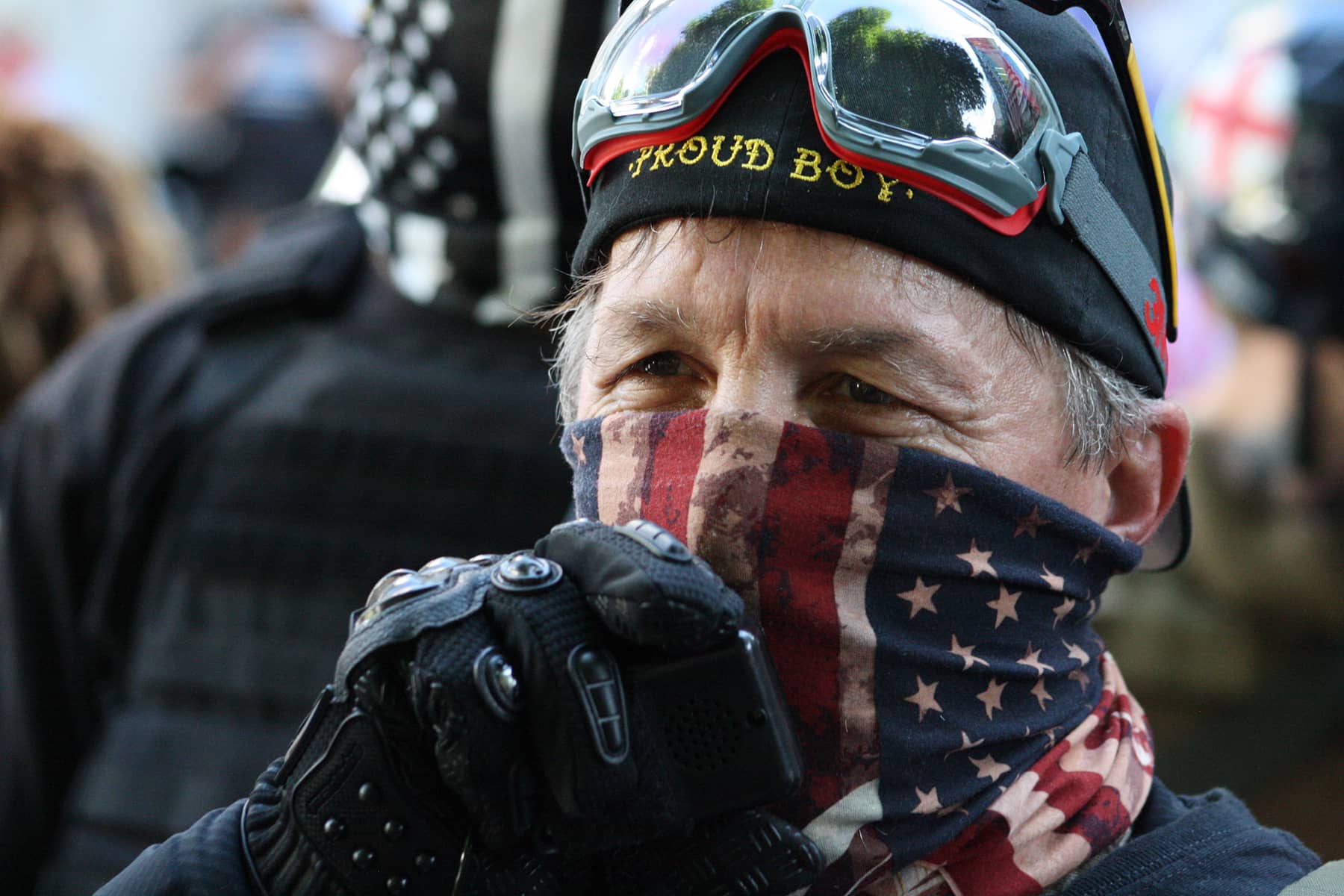 When I was a child there was a kid in our neighborhood who made my life hell. Dennis was a bully and delighted in chasing and beating up me and several others; we’d alter our route home from elementary school to avoid him.

Some of the kids he pounded on joined him as a way of protecting themselves from him — the way Lindsay Graham sucks up to Donald Trump — which only increased the terror level for the rest of us in our little lower-middle-class suburb as Dennis and his friends formed their own gang.

If there was an 8-year-old 1959 version of today’s Republican street-fighting white supremacist groups, it was Dennis and his buddies. They reveled in intimidating people and could smell fear from a block away. I knew they were authoritarians before I even knew the word or its meaning.

As we graduated into middle school, I learned that Dennis grew up feeling powerless and frightened: his father would tie him to a pole in the basement and whip him with a belt for the slightest infraction.

Powerlessness and humiliation are the soil in which authoritarianism grows.

When German soldiers returned home from their crushing defeat in World War I, they formed armed civilian militia groups looking for a leader: Hitler provided them with one, organizing them into the volunteer paramilitary group we remember as the Brownshirts.

Over the past 42 years Reagan’s neoliberalism has ripped apart the American working class, shipping over 60,000 factories and formerly good-paying union jobs to Mexico and China. As a result, tens of millions of formerly middle-class men have seen their fortunes crumble.

Unable to find the kinds of blue-collar jobs that were common forty years ago and unqualified for white-collar work, they find themselves unable to provide for their families in the way once available to union manufacturing workers.

Compounding the crisis, three major tranches of tax cuts for the morbidly rich (Reagan, Bush, Trump) have turned America into the most unequal society in the developed world. The morbidly rich pay almost no taxes and just get richer and richer, while the men at the bottom of society’s economic pile simmer in a stew of resentment and rage.

Putting a match to this pile of tinder, Republicans since Richard Nixon have been telling their base that the real cause of their economic problems are “welfare queens” and affirmative action: barely disguised code for “Black and Hispanic people.“

A functioning civil society requires trust. Trust in government and trust in each other.

But who can trust a government that has impoverished them? Who can trust city slickers who’re living high on the hog as rural America sinks deeper and deeper into debt?

Men in Red states watched, resentful, as an educated urban middle class replaced them at the center of the American economy. The Brookings Institution found that in 2016 the counties that put Donald Trump in the White House generated only 36% of the nation’s economic output; by 2020 Trump-voting Red counties had fallen to just 29% of the economy.

I remember, back in 1959, watching a black-and-white gunslinger TV show after a day Dennis had given me a bloody nose on my walk home; I imagined how satisfying it would feel to — like the hero on TV had against the bad guy — pull a gun on Dennis and watch his face change from arrogance to terror.

That theme — using weapons to overcome powerlessness — is at the core of so many of our movies like those starring Bruce Willis, Liam Neeson, and Nicholas Cage. It’s a feeling most people can instantly identify.

Thus it shouldn’t surprise us that when Bushmaster wanted to market their guns to these same rural men they’d run a 2-year advertising campaign around the theme of “Consider Your Man Card Reissued.”

Man-cards to sell guns are bad enough. Man-card guns in politics, though, are lethal to a body politic.

When Republican presidential candidate Donald Trump invited the Oathkeepers to “protect” polling places in the 2016 election, both America and our white supremacist militia movement crossed the Rubicon.

The last time a political party in this country had an armed militia wing was back in the late 19th and early 20th centuries, when the Klan terrorized Black people who wanted to vote.

A political party with an armed paramilitary wing is absolutely inconsistent with democracy, as we learned from the Klan and Germany discovered in the late 1920s.

But Trump wasn’t an outlier. Ever since the 2008 election of our first Black president, Republicans across the country have been campaigning with assault weapons in their ads and on their Christmas cards.

Guns and gun-sight cross-hairs are now the norm in GOP marketing, and gun sales since 2008 have gone through the roof.

In 2001 only 3 million guns were manufactured in the US. In 2009, President Obama’s first year in office, they skyrocketed to over 5 million. By his fifth year in office they were pouring out of the factories at a nearly 11 million-per-year clip.

And that doesn’t count the guns manufactured overseas and sold in the US. As the Visual Capitalist website notes:

This is known as a generative process: the more it happens, the more it causes. As gun violence increases, so does the fear of being a victim of it: by 2020, 40 percent of gun purchasers were by first-time buyers, a 67 percent increase over previous years.

As the number of guns increases and Republican politicians continue to scapegoat minorities and threaten “Second Amendment solutions” to political problems from 2011 to today, trust in society’s ability to keep us safe collapses.

Combining that with a sense of victimhood provokes an explosive search for the villains responsible for economic, political, and social stress.

And the GOP has been more than happy to identify to their white base exactly who those villains are: Democrats, liberals, and people of color. Donald Trump kicked off his 2015 primary with that simple proclamation: it’s those Brown people coming from across the border. And, of course, that “illegitimate” Black guy who was then in the White House.

Pitting society against itself — whether it is race against race or rural against urban — always provokes an authoritarian response. It is the natural reaction to us-versus-them polarization, particularly when it’s armed.

This combination of racially tinged scapegoating directed at a heavily armed populace is lethal poison to a democracy. And, once started, it’s damn hard to stop.

But the GOP has no intention of stopping it. Now that owning and displaying weapons have become core to the identity of white Republican men, Republican politicians got the memo.

In the wake of the recent Highland Park slaughter and President Biden’s call to ban high-capacity clips and high-power weapons of war, Texas Senator John Cornyn announced Tuesday that Republicans would absolutely block any efforts to control the number and lethality of guns circulating in America.

This is not a position the majority of Americans endorse: support for an assault weapon ban and rational gun control is at an all-time high.

But as the GOP continues to embrace their armed militia wing — their 2022 version of the Klan and the Brownshirts — the grownup Dennis’s of our nation continue to answer the call and bring their weapons with them.

Subscribe to The Hartmann Report directly and read the latest views about U.S politics and other fascinating subjects seven days a week.

What’s the future of conservative America and the GOP?
Bushcraft Production Line: Quick Easy Safe Cutting Tips
Survival Fishing – Most epic survival basket fish trap ever!
Say or do what is necessary now or forever hold your peace!
Official who refused to cooperate with illegal AZ hand-count describes threatening environment in resignation letter