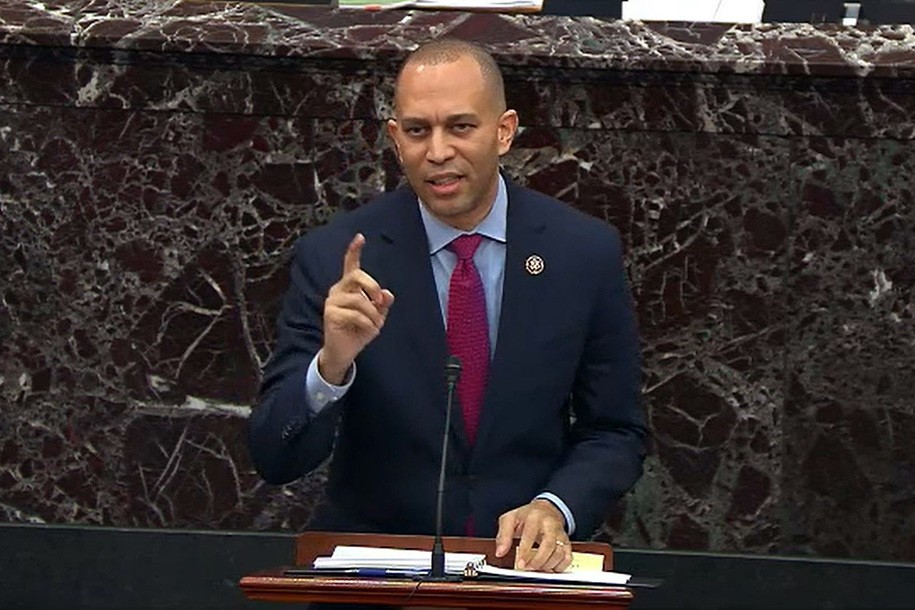 A lot of people take the poem at very shallow value, like “by the time they get to you there’ll be nobody left to speak up on your behalf,” but that’s only half of it.

The final lessons of the 2022 midterms

So, we have new clarity on what turned out to be the strongest midterm election for a party holding the White House in 20 years. There was a national shift toward the GOP, but not everywhere. The red wave was strongest in Florida, New York, and parts of California; it was a dribble, or less, in swing states like Michigan. Here are a few key things we’ve learned.

Uncovered in the Twitter files was that people in the Biden campaign requested the removal of nude photos of Hunter Biden. In our new poll, 83% of Americans said nude photos posted of people without their consent should be removed from social media sites.https://t.co/hyQfDMByPu pic.twitter.com/p26A71NmyD

The Making of Hakeem Jeffries

From Insurgent Challenger to Insulated Incumbent: A deep dive on the new House Democratic Leader’s storied rise through Brooklyn Politics

Early on, Jeffries allied himself with Rep. Joe Crowley, not only a Congressional colleague, but the Chairman of the infamous “Queens Machine.” Crowley, the House Democratic Caucus Chair, was laying the groundwork to succeed California Rep. Nancy Pelosi as Speaker – either via Pelosi’ retirement, or a direct challenge. A rising star from the neighboring borough, Jeffries was a fundamental building-block to any coalition Crowley hoped to assemble. Given that Pelosi, Hoyer, and Clyburn – the three ranking Democrats above him on the leadership ladder – were a generation older, Crowley was in pole position to benefit from a changing of the guard in leadership.

You all know what happened next.

Crowley’s stunning defeat at the hands of Alexandria Ocasio-Cortez marked a watershed moment in Democratic Party politics. Insurgent leftism had broken the door down, causing a tremor that rippled from Junction Boulevard to Capitol Hill – leaving Jeffries, not even six years into his tenure in Washington, with a golden opportunity to fill the power vacuum.

[@opinion] Most analysis has been on the slowing nominal growth in the labor market lately, when the real story is how real income growth is accelerating due to the drop in gasoline and core goods prices: https://t.co/dQ6YE0ZGDo

Kyrsten Sinema doesn’t get the credit she deserves

Democratic normies have come to believe that Sinema, in cahoots with US Senator Joe Manchin of West Virginia, have time and again “hijacked” the president’s legislative agenda, “forcing major concessions that include changes and cuts to tax, health and climate legislation,” according to Arizona Republic editorial writer Elvia Diaz.

This is taken as obviously true.

This is neither obvious nor true.

One in six people in Britain are worried about running out of food and more cannot keep warm enough in their own homes, according to an official survey that also showed a widespread sense of social and economic failings https://t.co/SjL8BklvFY

The World-Changing Race to Develop the Quantum Computer

Such a device could help address climate change and food scarcity, or break the Internet. Will the U.S. or China get there first?

Classical computers speak in the language of bits, which take values of zero and one. Quantum computers, like the ones Google is building, use qubits, which can take a value of zero or one, and also a complex combination of zero and one at the same time. Qubits are thus exponentially more powerful than bits, able to perform calculations that normal bits can’t. But, because of this elemental change, everything must be redeveloped: the hardware, the software, the programming languages, and even programmers’ approach to problems.

Over 13B COVID shots worldwide.
If antivaxxers were right, there should be millions of vaccine deaths, so many it couldn’t be hidden. Most people should personally know someone who died of vaccines or was at least hospitalized, like with COVID itself.
But, you know, there aren’t.

Musk, Fauci, trust in science, and how to make it survive

Any forward-facing scientist can tell you that receiving dangerous messages has been a common occurrence throughout the pandemic. But the hate, resentment, frustration, and anger was crystallized in one instance over the weekend: Elon Musk—the world’s richest man and new owner of Twitter—wrote the post below.

Five words, that were wrong on so many levels, garnered more than 1.17 million “likes,” 177,000 retweets, and international attention in mass media. Anyone who dared to disagree received a wave of truly grotesque comments. Even Musk noticed as he followed up on his original tweet with: “Truth resonates…”

Sitting in the historic Board of Education room at the Capitol where Speaker Sam Rayburn once held court and where then-vice president Harry S. Truman learned that President Franklin D. Roosevelt had died, Pelosi displays more emotion about the abortion issue than almost every other topic: “If there’s one issue that is about disrespect, about turning back the clock on women and their opportunities in life and the rest, it’s this issue.”

She pulls no punches when it comes to the Catholic Church, specifically the American bishops who have for decades fought abortion tooth and nail. “They all have decided when life begins,” she says, but observes that the Catholic Church had debated this issue for centuries. “It’s a women’s rights issue in addition to a women’s health issue,” she insists. “We have to prevail.” She also decries the church’s position on in vitro fertilization. “In vitro fertilization, you’d think they would embrace that, right? That, I don’t get,” she says.

“Don’t make the wrong mistakes on inflation.”
I cite the great Yogi Berra to argue the danger of actions that could lead to spikes in unemployment & lower wages. The Fed has hiked interest rates a lot. It should pause & acknowledge it’s not the 1970s: https://t.co/VKsgZaYeIJ

Republicans think they’re economic geniuses, but too many are hostile to immigration and diversity. That’s a drag on US firms trying to find workers and make money.

The Republican brand is business-friendly, but conservatives often draw the line at corporations they consider “woke.” GOP lawmakers in Georgia punished Atlanta-based Delta Air Lines for ending discounts to the National Rifle Association after the school shooting in Parkland, Florida. Congressional Republicans tried to punish Major League Baseball when it pulled the All-Star Game from Georgia over voting restrictions.

Florida Gov. Ron DeSantis punished Disney – famous for its popular “Gay Days” – for opposing a law limiting classroom discussion of LGBTQ issues. He says a new federal law protecting same-sex marriage could encroach on religious liberty and “there was certainly no need” for it. And he’s among many Republicans working to restrict what teachers and corporate trainers can say about race.

And for the record:

@JoyceWhiteVance put it best: “I’ll stick with Twitter for as long as possible because I believe in speaking truth to power. In many ways, that’s what civil discourse is all about. We’re in this together,” — I can’t say it better. That’s why I’m staying, despite Musk’s awfulness.