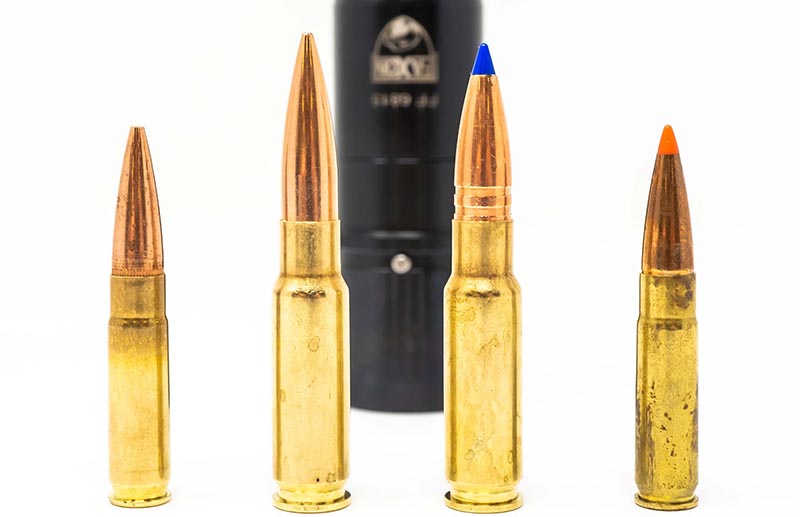 8.6 Blackout from Q is the new cartridge on the block, but what does it really bring to the table?

The 8.6 Blackout, aka 8.6 BLK or 8.6mm Creedmoor, is a new cartridge developed by Q, the company that brought us the Honey Badger, The Fix bolt-action rifle and the company’s own line of suppressors.

The 8.6mm is .338 caliber, and while it’s an absolute wimp compared to standard .338 cartridges (.338 Win. Mag. laughs at your weakness!) it’s designed to make putting a whole lot of lead downrange much easier.

So, is 8.6 Blackout all tactical hat and no cattle? Well, that sort of depends on what you might use it for…

The 8.6 Blackout is actually a modern version of an old idea.

In broad strokes, 8.6 BLK is an intermediate medium-bore cartridge. Those aren’t new. The .351 Winchester Self Loading and .35 Remington cartridges were the exact same thing and both pre-date World War I.

That isn’t a bad thing, however, as .351 WSL and .35 Remington were very popular and for good reason. Within reasonable distances, they allowed you to smack something like a deer or hog with a heck of a lot of lead without beating up your shoulder too badly.

However, 8.6 Blackout also has a particular angle in that it was created with suppressed shooting in mind, and indeed, is even optimized for it. That’s enough of a difference to essentially revitalize the old cartridge design ethos for the 21st Century.

The 8.6 BLK cartridge uses 6.5mm Creedmoor as a parent case, with the case trimmed to 1.685 inches (the 6.5mm Creedmoor’s case, based on the .30 TC case, is 1.92 inches) and necking it to 0.338 inches so it can seat the same .338 caliber bullets as other cartridges of this caliber. Just like 6.5mm Creedmoor, the bullet is seated to a rather shallow depth in the case to preserve powder capacity.

While ostensibly almost any .338-caliber bullet could be seated in the case, few factory loads are currently available. What is available is entirely from one ammunition manufacturer, Gorilla Ammo.

You can order your Gorilla ammunition optimized for a 16-inch, 12-inch, or 8- to 12-inch barrel. The lone supersonic loading is the 210-grain Barnes TSX load that the factory advertises at 1,970 fps from a 12-inch barrel.

Q designed the chambering to have a blistering twist rate of 1-in-3 inches for maximum stabilization. The typical twist rate for .338 caliber rifles is 1-in-10.

But how do these numbers translate to reality?

Based on these velocities and bullets, we can get an idea of the trajectory. All the following tables were calculated with ShootersCalculator using a 100-yard zero, a 2-inch height over bore (common with AR-platform rifles), 10 mph of 90-degree crosswind and no corrections for atmosphere.

That gives it excellent potential for penetration. While the trajectory makes .30-30 look almost flat-shooting, it still appears a very viable cartridge for hunting any game inside 200 yards—typical hunting distance for much of the country—with a short-barreled rifle or AR pistol whether suppressed or not.

But what about a supersonic load? Using Faxon’s load data for 210-grain Barnes TSX (a velocity of 2,065 fps and G1 of .404), here’s what the trajectory would look like with the same zero and height over bore:

The bullet goes transonic past 625 yards, but it retains 1,000 foot-pounds of energy (the legal minimum in some states for big game) to 525 yards. The maximum point-blank range is short (less than 150 yards) and the big pill has dropped fully 5 feet at 400 yards…but it’s still hauling almost 1,300 foot-pounds of energy, more than 55-grain M193 from the muzzle of a 20-inch barrel.

But what about its older yet smaller brother, .300 BLK?

But what does this ballistic profile portend?

It will poke deep holes in things and poke them good and hard with a lot of lead for a rather soft-shooting cartridge. However, long-range is not its forte unless you have the right scope (you’ll need an awful lot of Christmas tree!) and you put in enough time behind the gun.

Currently, 8.6 BLK rifles are available from Faxon Firearms as well as from Gorilla Ammunition.

Gorilla Ammunition offers their GF-10 8.6 Blackout carbine with an 8- or 12-inch barrel as well as their aptly named GF Bolt Action Rifle with a 16-inch barrel. These rifles start at $3,499 before options.

So…Is There Any Reason To Bother With 8.6 BLK?

New calibers are usually little more than the veneer of a blackguardly conspiracy to sell new rifles. Just because Q is a mainstay of Gun Culture 2.0 instead of Gun Culture 1.0 doesn’t somehow mean that there’s anything new under the sun in that regard.

If that’s news to you, we have a pallet of 7mm Remington Express sitting on a bridge that we’ve got for sale.

However, it’s not that 8.6 BLK is worthless. There’s a niche for it. The question is whether you live in that niche.

The excellent velocity and energy retention would make it a serious brush gun. If you hunt in heavy timber or foliage and wanted a compact (and suppressed) rifle that will bash hogs or whitetails flat without kicking your head off…8.6 BLK looks like a perfect fit on paper.

If you want to hit deer, hogs or what have you really hard and make them go down, 8.6 Blackout would seem to be a dynamite selection.

At present, there isn’t enough information to say it’s an appropriate choice for personal defense. It would seem to have the potential for that role, but—again—it’s a little early to say much more.

Given its excellent potential for barrier defeat, it could find a home with police departments and possibly even some military units as a better round for punching through vehicles, glass, or light structures.

And, of course, it will make one heck of a “dinnnnng!” if you shoot a steel silhouette with it. For some, that’s reason enough to give the new round a try.

While 8.6 Blackout may not be a game changer, it certainly has good potential and it will be interesting to see where it goes from here.