When law enforcement storms an enclosed area or building, better believe that one of the officers is carrying a shotgun.  Capable of blasting assailants at close range, no weapon is more feared than the shotgun. If you are looking for a weapon to strike fear into the hearts of a home intruder, the shotgun is an ideal choice.  The best shotgun ammo is equally important.

However, you have many different choices when it comes to shotgun ammunition. In the following article, we will look at some of the best choices for shotgun ammo, helping you find the round best suited to your situation. 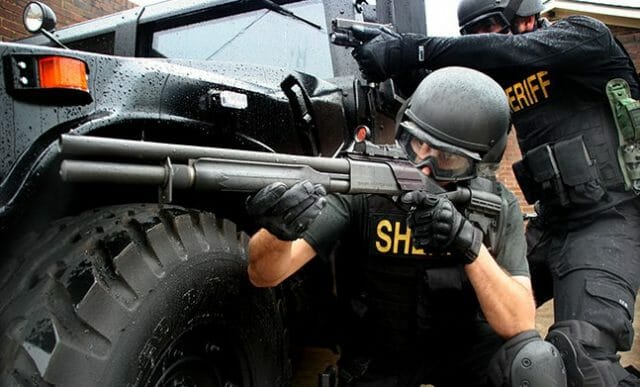 What to Look for in a Shotgun

Shotguns, alongside handguns, are among the best options for home defense.

When considering a shotgun for home defense, keep in mind the limits of the length of the barrel, as well as the kickback. When shooting at close-quarters, you don’t need to be overzealous. 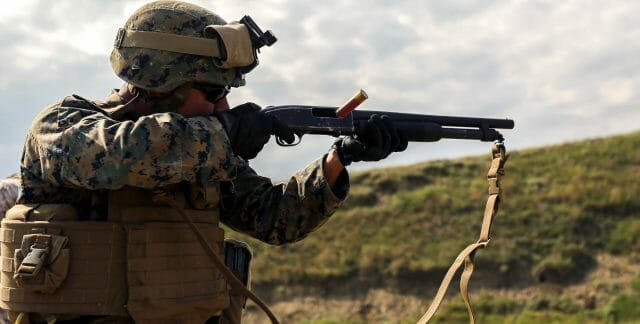 First, you need to choose the right home defense shotgun. Typically, when people talk about personal defense guns they are referring to a tactical shotgun.

Generally speaking, you are looking for a shotgun that’s easy to maneuver, as you will be using the weapon at close range. The police and the military use many different models designed for such situations.

Remember, you aren’t shooting at a long distance, so you can afford a shorter barrel. Just make sure that the barrel abides within federal and statutory regulations.

What to Look for in The Best Shotgun Ammo

There are three main types of shotgun ammunition. Before discussing them, let’s quickly go over some important shotgun terminology. Shotgun ammunition differs according to the following terms:

What Does Gauge In Shotgun Mean?

The gauge of the shotgun measures the inside diameter of the barrel. For a shotgun shell, you would think that diameter would be a measurement of length, gauge is actually a measurement of weight. It refers to the weight of the shell itself.

This term comes from the way that cannons were measured according to the weight of the cannon ball that would fit into the barrel. A twelve-gauge shotgun will fit a round that weighs one-twelfth of a pound.

What Does Shot Mean in Shotgun Ammo?

Shot refers to the small metal pellets contained within a shotgun shell or cartridge. When fired, the pellets spread out, creating a wider pattern of damage.

These pellets are numbered according to the size of the pellet. Birdshot is the smallest, buckshot the largest. They are measured in terms of their diameter.

When you look at Birdshot it will have smaller pellets that will make a much larger spread. 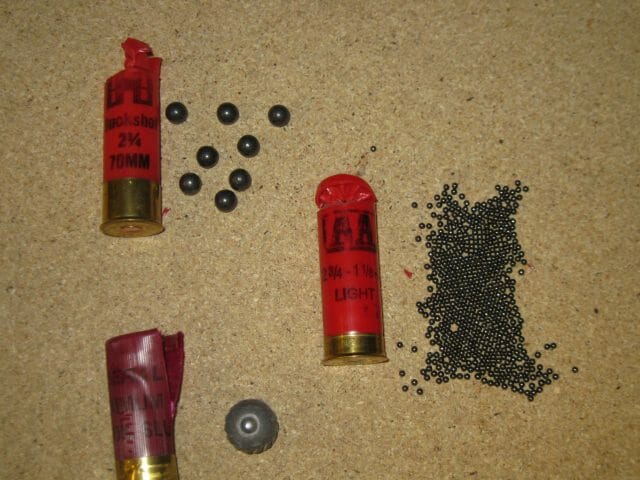 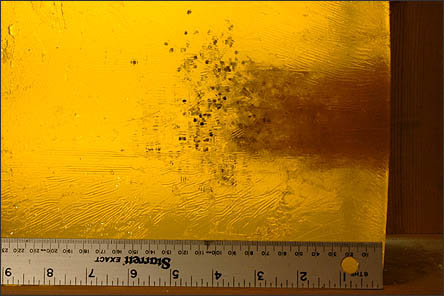 It is generally too light and lacks enough stopping power to be effective against human targets but will cause less collateral home damage and less death from being shot. Don’t get me wrong, can still use buckshot or slugs if you are looking for a shotgun round for home defense.

As you can see from the ballistic gel example, birdshot doesn’t penetrate very deep. This means that you will not have the lethality needed to stop an attacker. If you are more concerned with disrupting an intruder or scaring away an ex-boyfriend, you might prefer birdshot. However, this doesn’t mean that birdshot is non-lethal.

It can often mortally wound an attacker. However, birdshot lacks the penetrating power you need to put a stop to an attacker (as evidenced by the ballistic gel), making it an inferior choice for killing power.

Birdshot also has the advantage of being the cheapest shotgun ammo as well. So the next time you hit the range to blow up some pop cans or tannerite, target birdshot loads will be the way to go.

What is BUCKSHOT Ammo?

Buckshot is a type of shotgun ammunition that is made up of several small metal pellets or “shot.” It is typically used for hunting and self-defense, and is available in a variety of sizes, ranging from #4 (the smallest) to #000 (the largest).

Buckshot is generally more powerful than birdshot, which is another type of shotgun ammunition. 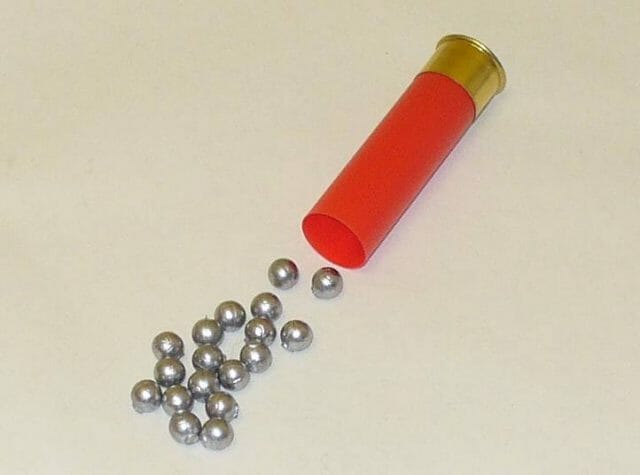 Police often use a 0 or 00 buckshot rounds for close encounters. Buckshot will have significantly more firepower, packing a lethal punch. Notice the significant difference in power when buckshot is fired into ballistics gel: 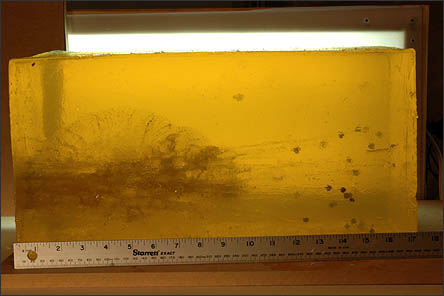 Most people arming themselves for home defense prefer lethality. If you are looking to kill an intruder immediately, buckshot will deliver the coup de grâce. A 00 buckshot round has eight or nine pellets. Each pellet is about eight and a half millimeters wide.

Any of these pellets will cause significant damage or injury, mortally wounding any intruder in almost every case. Such pellets are custom tailored for self-defense, as well as hunting larger animals, packing your shotgun with the punch it needs to deliver a killing blow.

Although birdshot works well for hunting, it lacks the instant lethality necessary for home defense.

Despite the lack of lethality, the fact that birdshot can often mortally wound an intruder also makes it less ideal for people looking to inflict non-lethal damage, such as officers looking to slow a suspect or those whose moral principles prohibit them from taking a life. Non-lethal damage is best inflicted with rubber pellets.

A shotgun slug carries a large hunk of metal, rather than pellets. Police typically switch to slugs when firing at a further range. Here’s a picture of a slug: 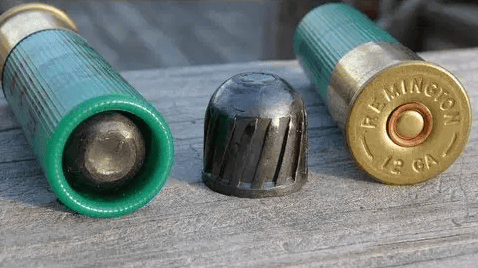 As you can see, the round contains a large hunk of metal. The metal is grooved to give you a rifling effect for increased accuracy.

Birdshot works better for target shooting than home defense. Birdshot is probably only viable for when you want to avoid damaging your walls or neighbors when firing in your apartment. Let’s look at some of the different options:

These rounds penetrate less than five inches into ballistics gel.

The recommended amount for lethality is twelve to eighteen inches. This makes it much too weak.

These rounds tend to make it up to about seven inches into the gel, making it much less than ideal. 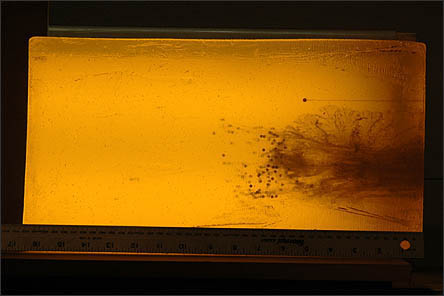 These make it slightly past ten inches, giving it a much better improvement over #8, but still not quite the punch necessary. 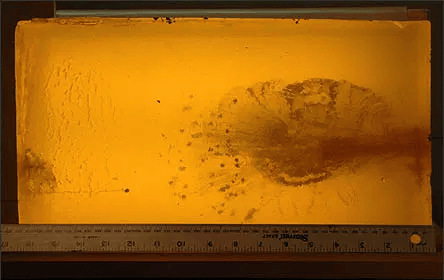 These will definitely stop an intruder, but not enough to prevent him or her from squeezing off a few additional rounds.

Here are few of our favorites when it comes to the best birdshot shotgun ammo. 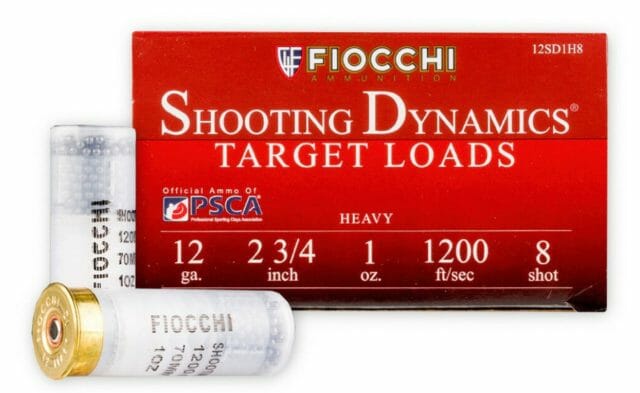 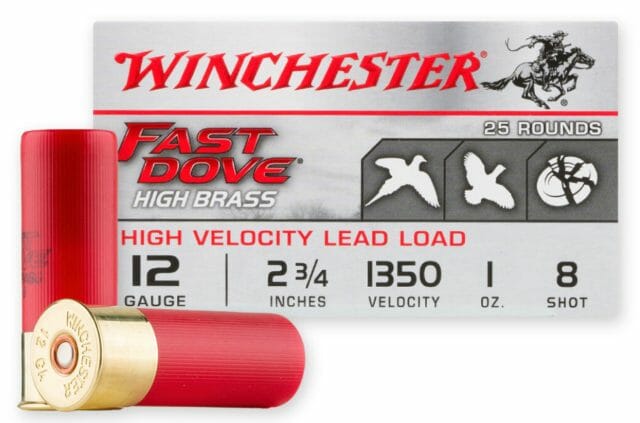 Buckshot delivers the blow you need to stop an intruder. Just remember never to point your gun at someone unless you intend to pull the trigger. Buckshot is extremely lethal, and not to be used lightly.

A round of #4 buckshot delivers over fourteen inches of penetration into the ballistics gel. 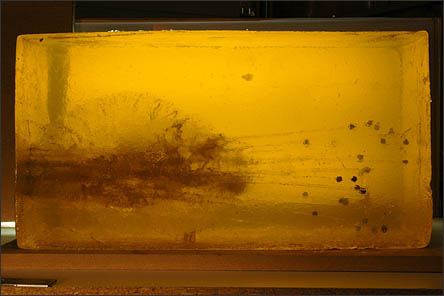 This is definitely within an acceptable range, but not as powerful as a 00 round. Consider using #4 buckshot for apartment complexes or if you are worried about damaging furniture. This is the minimum you want to use for a tactical situation.

A number one buckshot round will deliver a much bigger punch, sending pellets as far as sixteen inches into a ballistics gel pack: 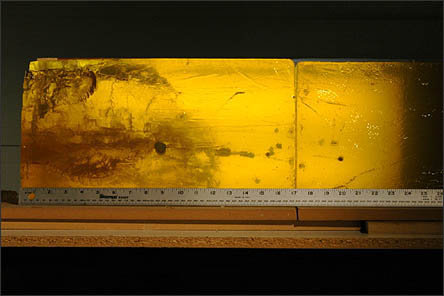 This makes the number one a decent choice as well, giving you the lethality you need for a tactical situation.

The 00 buckshot is used by most law enforcement agencies. It gives you what you need for guaranteed lethality, making it highly recommended for home use. On average, 00 buckshot will penetrate twenty inches of ballistics gel.

As can be seen in the image, a 00 buckshot round will exceed the 18 inch minimum, giving you an extra punch of lethality. It’s going to be the standard choice for a law enforcement tactical situation, and you should definitely consider it as an option. 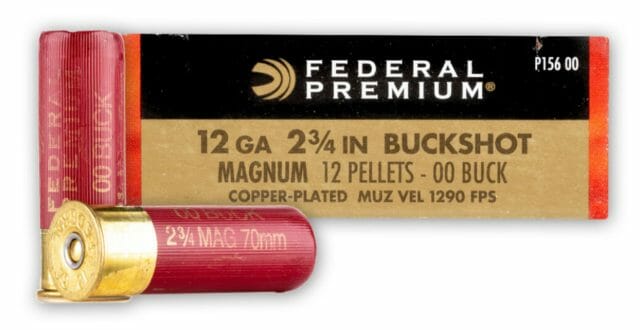 When looking at the two Federal options, it’s all about recoil.  If you want a little less recoil go with the Power Shok. 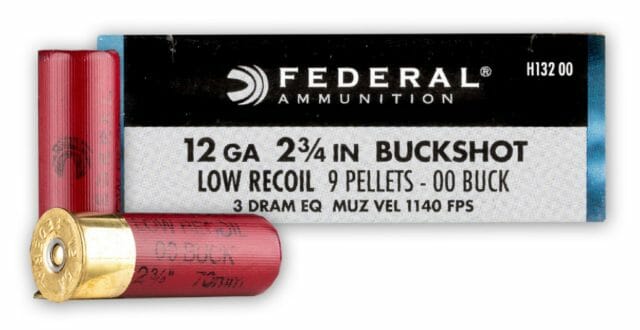 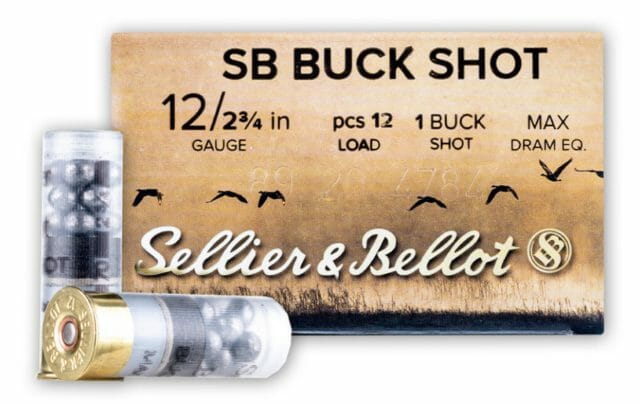 A slug will give you twenty-seven degrees of penetration. 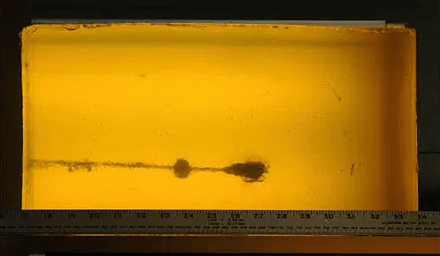 What is a Shotgun Slug?

A shotgun slug is a heavy, typically lead, projectile that is usually fired from a shotgun. Unlike traditional shotgun shells, which contain multiple small pellets, shotgun slugs are one solid piece of lead or other material. They are generally more accurate than traditional pellets and are primarily used for hunting larger game and for self-defense.

No, shotgun slugs are not generally recommended for home defense. The size and power of the slug means that it can travel through walls and potentially injure or kill people in other rooms of the house. Additionally, the recoil from the shotgun can be difficult for some people to manage. Instead, it’s usually recommended to use buckshot or birdshot for home defense.

Here are few of our favorite Shotgun Ammo Slugs 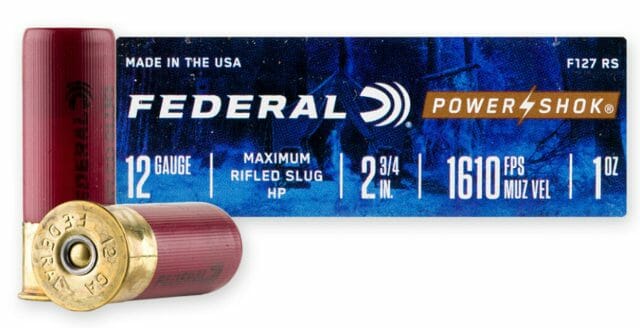 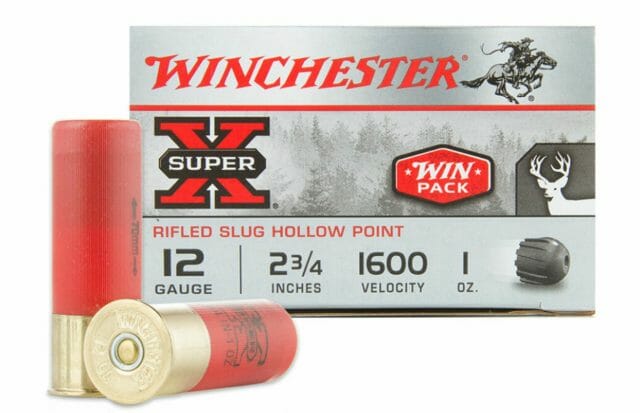 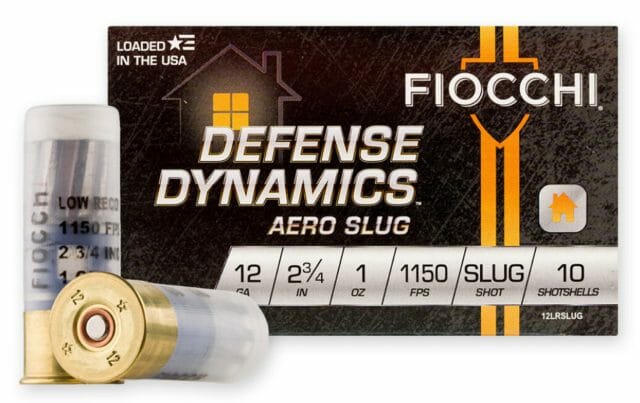 We hope that we have helped you understand the basics of shotgun ammunition, helping you learn to make the right choice for home defense.

To quickly recapitulate the results, we looked at the different kinds of birdshot, buckshot, and slugs.

We suggested that buckshot is the superior choice for a tactical situation, as slugs are designed for close range while birdshot is designed for less lethality.

That’s why we recommend using buckshot, especially in the 00 range, for a tactical situation.

Did we miss any important ammo types for shotguns? Drop a note in the comments and let us know!

Best Over And Under Shotgun