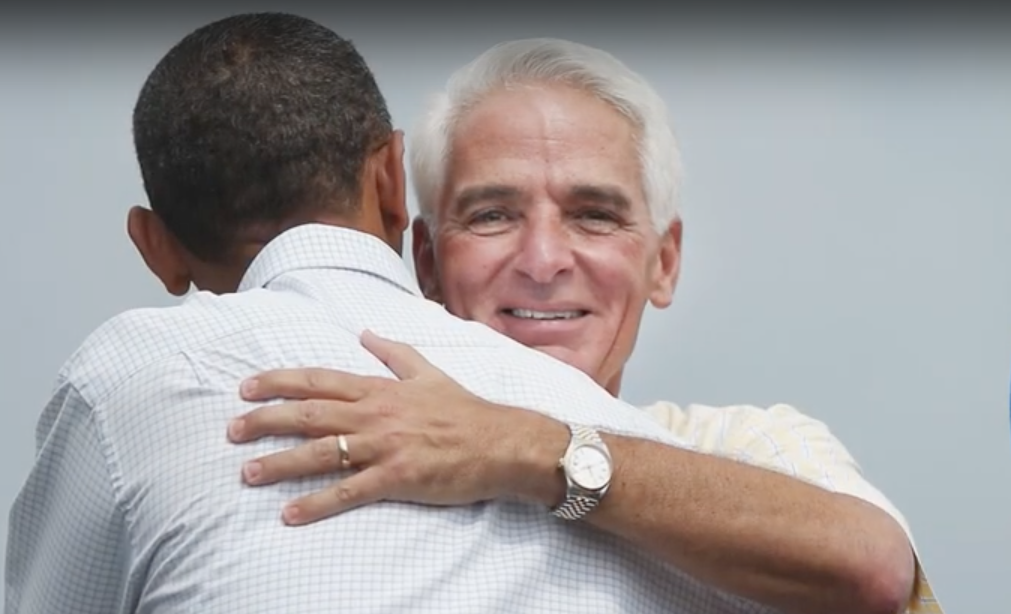 Remember “The Hug”? The one that pretty much got Charlie Crist exiled from the Republican Party a full year before the then-Republican Governor actually quit being a Republican?

Crist does. The exuberant hug he shared in 2009 with then-President Barack Obama — a Republican Governor embracing a Democratic President over federal stimulus money coming to Florida — was the beginning of the end of Crist as a Republican. It led to his eventual self-reinvention as a Democratic Congressman.

Now he’s turning the moment into a campaign commercial heading into his Democratic Primary Election with Agriculture Commissioner Nikki Fried.

Crist’s new 30-second spot, “The Hug,” offers video evidence that maybe Crist was, long ago, a bosom buddy of the Democrats’ most popular leader of the 21st Century. The commercial actually features video of two hugs. It allows Obama to deliver the messages.

“Gov. Crist shares my conviction that creating jobs and turning this economy around is a mission that transcends party,” Obama said in his 2009 remarks while visiting Florida, which plays out in the new ad. “And that’s what Charlie Crist is doing right here tonight.”

There’s also a lesser message offered by a narrator, reminding Floridians of the 2008 recession that led up to that moment, and crediting Obama and Crist for bailing out Florida.

Fried’s campaign responded as if Crist is reinventing that moment. Fried’s camp put out a response noting that in 2008 Crist actively campaigned against Obama and for the Republican ticket of John McCain and Sarah Palin, calling Palin “very impressive.” The response also lists several other moments following the hug, in which Crist seemed determined to distance himself from Obama.

“Charlie Crist only believes in one thing: himself,” Fried’s communications director Keith Edwards said in the statement. “Floridians don’t need any more fair-weather politicians, and that’s why they’re going to elect Nikki Fried to be their next governor.”

The Obama-Crist hug led to a widespread rejection of Crist by many Republicans. In 2014, the Washington Post described the embrace as “the most famous/infamous hug in modern American politics.”

In his 2014 memoir, “The Party’s Over: How the Extreme Right Hijacked the GOP and I Became a Democrat,” Crist cites the hug and its political consequences as the impetus for his decision to leave the party, and his eventual transformation into a Democrat.

The new commercial comes at a time when Crist and Fried have been blasting each other’s bona fides as Democrats.

Fried has repeatedly sought to tie Crist to his past support for Republican platforms. In her latest TV ad, she characterizes herself as the “only statewide elected Democrat, only pro-choice Democrat, only Democrat to have never taken a dime from the National Rifle Association,” and seemingly dismisses Crist as one for whom “it depends on which way the wind’s blowing.”

John Fetterman attacked NRA members as ‘lunatic fringe of gun ownership’
Solo Overnight Building a DIY Debris Cabin in The Woods and Skillet Lasagna
Nothing Beats Shot Placement
Most People Do This the HARD Way – Seam Seal a Tent or Tarp and Make Repairs – Seam Sealing Guide
Home Depot Bug Out Bag! It Surprised Me!