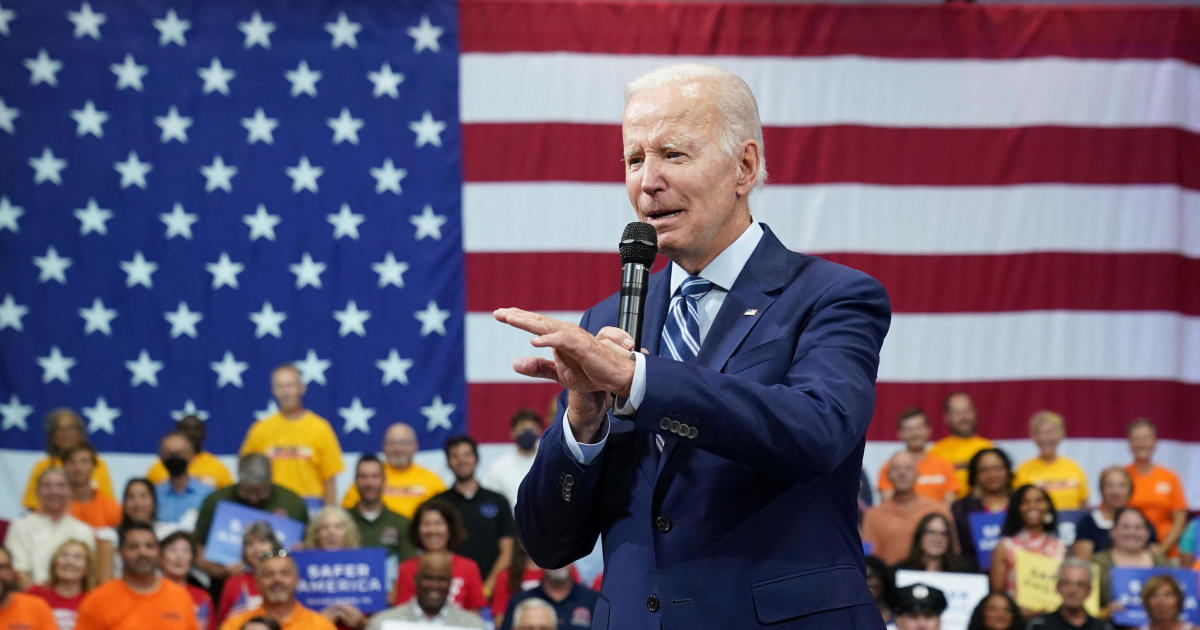 Washington — President Biden was in his element Tuesday just outside his hometown of Scranton, Pennsylvania, greeting friendly faces and detailing his $37 billion plan aimed at addressing gun violence. He also took the opportunity to denounce Republicans who defend the Capitol rioters and disparage federal law enforcement, while praising Democrats running for office in Pennsylvania.

At an event in Wilkes-Barre that showcased several Democratic candidates, the president touted his “Safer America Plan,” a proposal that would be funded through money included in his fiscal year 2023 budget request and requires congressional approval. Mr. Biden was born in Scranton and spent his early childhood there, and has often returned to make major speeches from the area. He was originally scheduled to deliver Tuesday’s speech in July, but was forced to postpone the trip when he tested positive with COVID-19.

With just over two months until the midterm elections, Mr. Biden emphasized the need for more law enforcement officers, not fewer, contradicting the message from some of the most liberal voices of his party. The president said Americans “see hate and anger and violence just walking the streets of America.”

“And they just want to feel safe again. They want to feel a sense of security. And that’s what my crime plan is all about. You know, I call it the Safer America Plan,” he added. “And both of your members of Congress voted for it. It’s based on a simple notion — when it comes to public safety in this nation, the answer is not defund the police, it’s fund the police.”

The president’s crime prevention proposal calls for $13 billion over the next five years for communities to hire and train 100,000 additional police officers, as well as nearly $3 billion to help clear court backlogs and solve murders, according to the White House.

Mr. Biden’s plan would also establish a $15 billion grant program for cities and states to use over the next decade to promote approaches to prevent violent crime or identify non-violent situations that warrant a public health response, with the goal of alleviating the burden on law enforcement officers. Another $5 billion would be used for evidence-based community violence intervention programs. Trust between police and the public is vital, the president said.

“The communities, by the way, that want the police more than any other community are the tough, poor communities. Black, White, immigrants,” Mr. Biden said. “They need the help. They want the help.”

The president touted the passage and signing of the Bipartisan Safer Communities Act, the most significant update to gun control laws in nearly three decades. The law enhances background checks for gun buyers under 21, provides billions of dollars for mental health services and sets aside $750 million to incentivize states to create crisis-intervention programs. The measure also closes the so-called “boyfriend loophole” to ensure convicted domestic abusers can’t purchase a firearm for five years.

“We beat the NRA,” the president said Tuesday, referring to the National Rifle Association. “We took them on and we beat the NRA, straight up. You have no idea how intimidating they are to elected officials … But guess what, we took on the NRA, and we’re going to take them on again, and we won. We will win again.”

The president reiterated his desire Congress to ban assault weapons, a nonstarter since he took office and a near impossibility without Democratic victories in November.

Pennsylvania is a key swing state, with control of the Senate in play in the midterm elections. Democratic Lt. Gov. John Fetterman is running against Republican Mehmet Oz for Pennsylvania’s Senate seat.

“I tell you what, Fetterman’s a hell of a guy, a powerful voice for working people,” Mr. Biden said Tuesday. “And he’s going to make a great United States senator.”

In his speech railing against violent crime, the president turned to address the violence of Jan. 6, 2021, lambasting Republican members of Congress who defended the rioters.

“Police lost their lives as a result of that day,” the president said. “Police lost their lives. One of the officers said it was worse than anything he had experienced in war in Iraq. So let me say this to my MAGA Republican friends in Congress — don’t tell me you support law enforcement if you won’t condemn what happened on the 6th. Don’t tell me. Can’t do it. For God’s sake, whose side are you on?”

The president will return to Pennsylvania on Thursday, as well as next week, ramping up his appearances on behalf of Democrats in key competitive races.