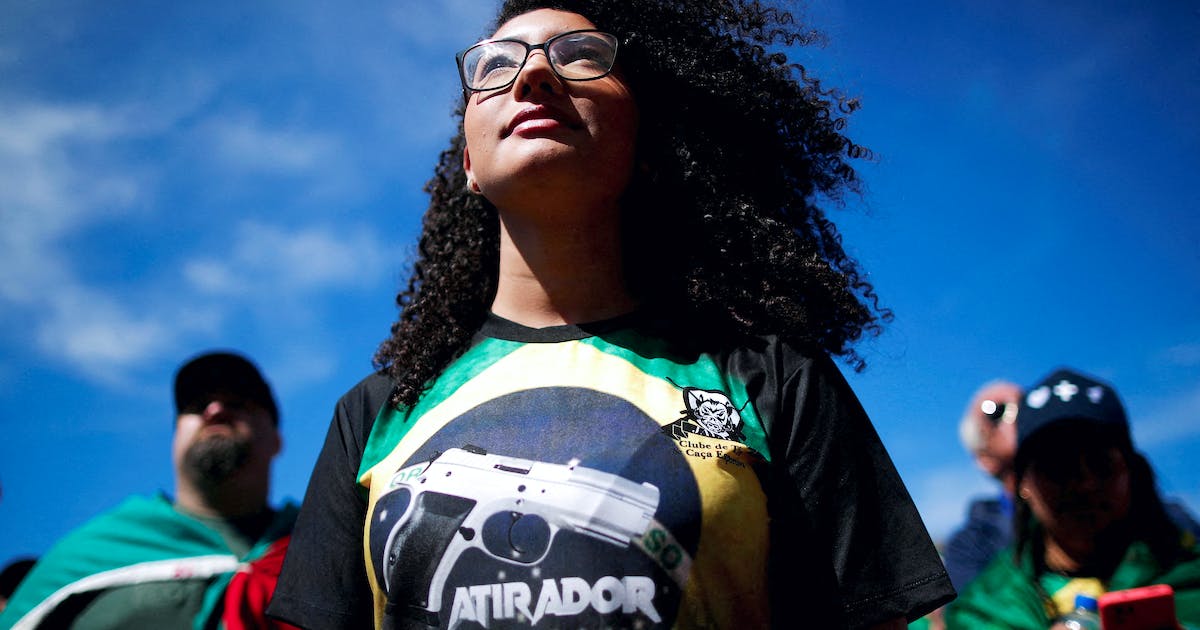 BRASILIA (Reuters) – A new wave of pro-gun lawmakers in Brazil, elected this month as part of a more conservative Congress, are likely to ensure far-right President Jair Bolsonaro’s vision of a more armed citizenry lives on – even if he fails to win re-election.

Brazil’s “bullet caucus” in Congress has long represented the interests of police and farmers interested in self-defense, traditional voting blocs with boots and budgets. But a series of looser gun regulations under Bolsonaro has forged a new breed of U.S.-style pro-gun politicians who put the individual’s right to bear arms at the center of their conservative identities.

“The idea is to form a caucus whose priority is to defend the citizen’s right to have access to firearms,” said Marcos Pollon, the most-voted lawmaker-elect from his midwest farm state and the head of lobby group PROARMAS, which models itself on the U.S. National Rifle Association.

Speaking ahead of the Oct. 2 general election, Pollon told Reuters he hoped some 80 PROARMAS-backed candidates would get elected. In the end, 39 won seats, including eight senators, 20 federal lawmakers and 11 state lawmakers, according to research from the Sou Da Paz and Igarape Institutes.

Although explicitly pro-gun candidates fell short of Pollon’s hopes, their conservative peers were the surprise winners of Brazil’s election, giving parties allied with Bolsonaro about half the seats in the Senate and lower house of Congress.

Bolsonaro is now scrambling to win votes and endorsements ahead of a tense Oct. 30 runoff against Luiz Inacio Lula da Silva, a leftist former president. But even if Bolsonaro loses, his pro-gun allies in Congress are well positioned to complicate da Silva’s pledge to “disarm” Brazil.

Ivan Marques, the managing director of The International Action Network on Small Arms, said it was “very likely” that newly elected conservative lawmakers would enact major reforms to broaden gun access in Brazil, the country with the world’s highest number of murders.

“The Senate is really going to change the configuration of that debate,” he said.

The upper house, where Bolsonaro’s party is now the largest, has until now been the major obstacle to his legislative agenda on gun liberalization.

Since taking office in 2019, Bolsonaro has signed dozens of executive orders to loosen gun laws, making it easier to buy weapons if Brazilians register as hunters, marksmen or collectors, or “CACs.” Nearly 700,000 Brazilians have now accredited as CACs, up almost 500% since 2018.

Bolsonaro’s executive orders have successfully stimulated private gun ownership, but they are fragile, and can easily be overturned by the courts or an eventual Lula administration. Even with the electoral gains for the pro-gun lobby, the next step toward legislation is not without obstacles.

For example, PL 3723, a bill which would embed the rights of CAC permit holders, allowing them to carry “ready-to-use” weapons, has already passed the lower house, putting it a Senate vote away from becoming law.

However, Senator Carlos Portinho, a leader of the Bolsonaro government’s coalition, told Reuters he did not expect PL 3723 to reach a vote this year, given other legislative priorities.

The current Senate leader, centrist Senator Rodrigo Pacheco, will not allow a plenary vote on the proposal, known as PL 3723, according to a person with knowledge of his thinking.

In response to a question from Reuters, Pacheco’s press office said he would wait for the bill to exit committee before deciding whether to bring a floor vote.

Pacheco’s role next year is far from assured, given the new composition of the Senate. If Bolsonaro fails to hold onto the presidency, analysts say, his conservative coalition in Congress could fray, hurting the leverage of pro-gun lawmakers.

Still, the bill now stands a better chance than before the election of reaching a final vote early next year.

Reuters has previously reported that the Federal Police, Brazil’s most respected law enforcement organization, have long opposed broadening gun access. Reuters has also revealed how Bolsonaro’s gun laws have made it easier for criminals to get hold of high-caliber weapons.

The new breed of pro-gun lawmakers are united behind the effort to pass legislation formalizing CAC permits in law.

Pollon, the lawmaker-elect who got over 100,000 votes in the farm state of Mato Grosso do Sul this month, founded PROARMAS as a way to elect more pro-CAC lawmakers, and has close ties to the president via his son, federal lawmaker Eduardo Bolsonaro.

In an interview, Pollon said the legislative priorities for his group of CAC-affiliated lawmakers include the approval of PL 3723, broader self-defense protections for armed Brazilians and tax changes to encourage firearm ownership.

“We need to approve self-defense as a constitutional right,” he said.

.44 Magnum Model 29 8-inch (Close-up)
Chuck Haga: Thanksgiving’s over. Now let’s get to work on changing the world
Woodsman’s Pal Survival Tool – US Made Quality Since 1941
Cleaning your Bushpot in the Field
Sunday Shoot-a-Round # 106