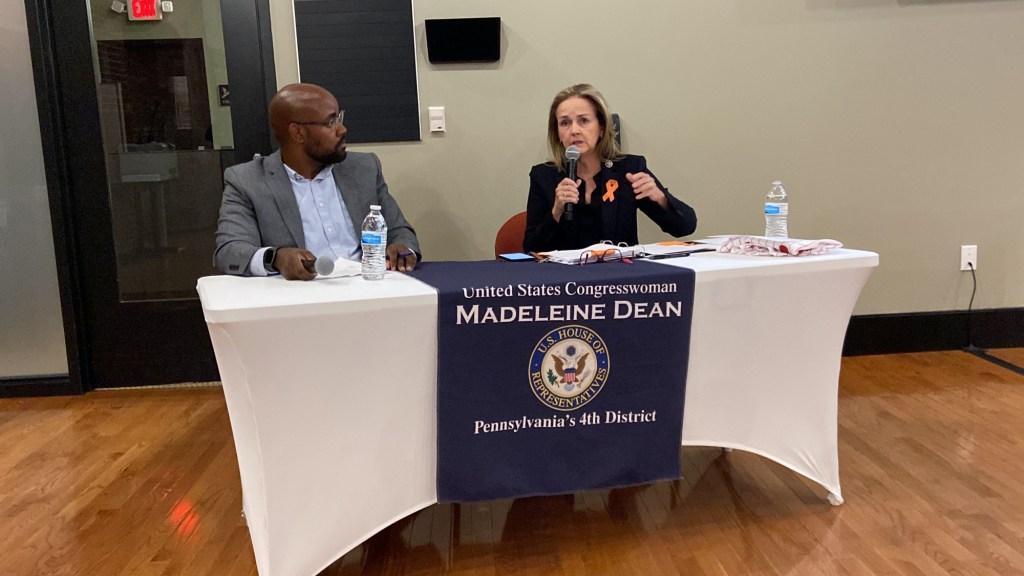 POTTSTOWN — Whether it was questions about national and international issues, such as inflation, Ukraine and gun violence, or local issues such as the Hale Street home explosion, property damage from Ida or rising homelessness in Pottstown, U.S. Rep. Madeleine Dean, D-4th District, fielded them all during a town hall meeting Wednesday night.

The meeting was held in the North Hall of Montgomery County Community College’s Pottstown campus and was held just 20 days before the election in which Dean will face Republican challenger Christian Nascimiento at the polls.

Although the campaign did not come up directly, Dean answered many of the questions by pointing to accomplishments of the Democratic majority in Congress and bills passed and signed by President Joe Biden.

She acknowledged the economic pain being caused by inflation, with food and fuel costs increasing dramatically, while noting that Biden is releasing more oil from the nation’s strategic reserves to lower gas prices, eased restrictions at ports to help with supply chain issues as well as a bill encouraging the production of semi-conductors and computer chips here in the U.S., both as a boost for jobs and as a boost to national security.

It is also important when discussing inflation, Dean reminded the audience of more than 50, to understand that “it’s is real, it’s painful, but it’s also global.” She said the United Kingdom is seeing a 40-year high for gas prices as are other European nations; all of which were impacted by the pandemic, which affected supply lines and manufacturing, as well as the war in Ukraine, which is disrupting fuel and food supplies.

On the subject of the May 26 home explosion on Hale Street, Dean empathized and counseled patience. “There is still still no timeline on answers. We deserve answers, but right now I can offer you compassion, but not answers.”

Dean said gun violence is something she has fought to control through legislation for years both in Harrisburg and in Washington, but has constantly failed to get support, largely because of the National Rifle Association gun lobby.

“We couldn’t even get a hearing when I was in Harrisburg,” she said.

“We’ve been beating our head against a wall for years” because of the NRA ‘s influence, she said, adding “I fail to understand why 18-, 19-, 20-year-olds can buy semi-automatic weapons, but not handguns.”

“This year, for the first time in 29 years, we passed the Safer Communities Act, the Senate agreed to it and the president signed it,” she said.

With the prompting of moderator and former Dean staffer Emanuel Wilkerson, Dean highlighted economic successes in Pottstown, including the help she brought to keep American Keg open, the federal government’s role in the clean-up of the former Pottstown Plating for redevelopment as well as funding for infrastructure, like the King Street bridge replacement.

Additionally, efforts to bring commuter rail back to the Schuylkill Valley, which Dean said “will happen during your lifetime and mine;” and parts of the recently passed Inflation Reduction Act will fund new initiatives such as charging stations for electric vehicles, noting that BMW just announced plans to build an EV vehicle factory in the United States.

When taking questions from the audience, Dean responded that the Post Office has been undermined by the management of Postmaster Louis DeJoy, noting that sorting machines were shut down and there is not enough funding for postal inspectors to investigate stolen mail. There are 300,000 complaints a year of postal theft and only 1% get investigated, she said.

Responding to Pottstown Borough Council President Dan Weand’s complaint that too many industries have become monopolies in the last decades and too many of America’s billionaires avoid paying taxes, Dean said that is why the plan to hire more Internal Revenue Services auditors is necessary, to track down income being hidden offshore, as well as legislation aimed to ensure that the top “1%” of wealthy pay at least 15% of income in taxes.

Responding to Pottstown School Board member Deborah Spence’s question about racial inequities, Dean said expanding the child tax credit lifted thousands out of poverty, but the Senate let it expire. More needs to be done, she said, observing that “we all knew that inequity existed, but COVID put a spotlight on that.”

As an example, she noted that during the pandemic, those who still worked providing food and at jobs like care in nursing homes were African-Americans and they often did so without adequate pay, adequate health insurance and adequate protection. “We have to do better,” she said.