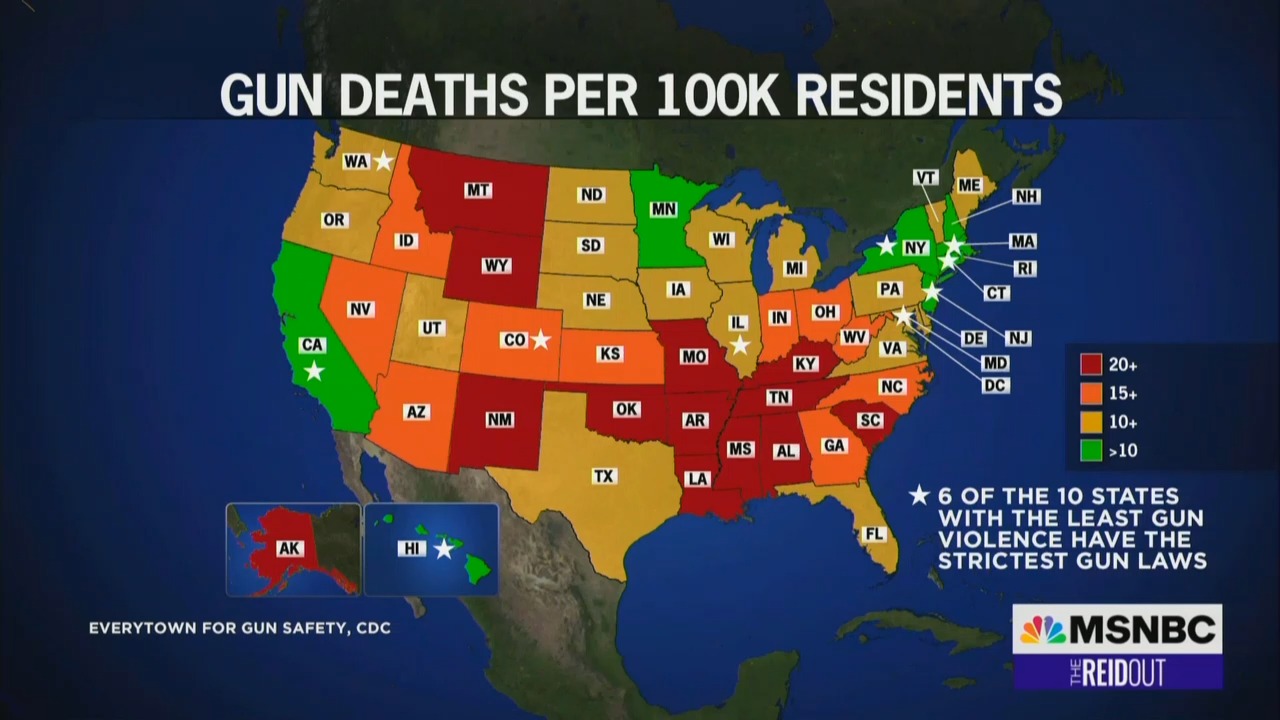 MSNBC host Joy Reid and guest Shannon Watts, an anti-gun violence activist and the founder of Moms Demand Action, ran through a myriad of stunning statistics related to gun violence in the U.S. on Monday and blasted the low voter turnout in states like Texas as “learned helplessness.”

And yet we continue to hear this gun manufacturer rhetoric that somehow more guns and fewer laws are going to make us safer. And if that were true, with 400 million guns and very few laws in this country, we’d be the safest country in the world. Instead, we have a 25 times higher gun homicide rate than any peer nation.

“I mean, and I will, look I brought receipts thanks to the wonderful producers here,” Reid replied before showing a series of graphics and running through some statistics:

Six out of the ten states with the least gun violence deaths have the strictest gun laws. California, Hawaii, New York, Massachusetts, Connecticut, and New Jersey. Mississippi has the least strict gun laws in the country and the highest gun violence rate.

The top five states in gun violence in order: Mississippi, Louisiana, Wyoming, Missouri and Alabama. The United States has 120.5 guns for every 100 people.

The next closest country is Yemen, then Serbia and Montenegro. You go all the way down and as you said, this is the country with the most murders by far. There is no country that’s not at war that has more gun murders.

“It’s the reason it’s much more comfortable going to a bar in New York City where they’re not carrying guns. Then it is to go in Atlanta where they can carry in a bar. It’s like it seems like it’s so obvious, but Republicans go, oh, there’s nothing we can do about it. But a lot of states are doing something about it,” Reid concluded.

“Absolutely. And look, this is rhetoric we’ve heard from the gun lobby and they’ve invested in these lawmakers and they’re their allies. But slowly but surely, we’re making progress. Right,” Watts said, adding:

When I started doing this a decade ago, about a quarter of all Democrats in Congress had an A rating from the NRA. Today, none do. And in fact, when we passed the first ever federal legislation in nearly 30 years through Congress this summer, it had 15 Republicans sign on.

So we have to release the stranglehold that the gun lobby has had on our lawmakers finger by finger. And we’re doing that. But, you know, when we look at what is tying these gun deaths in this country together, and let’s be clear, it’s not just mass shootings, right? It’s the daily gun violence that kills 110 Americans. There is something most of them have in common, and that is easy access to guns. We also have something no other country has, and that is a gun lobby that profits, gun manufacturers by writing our gun laws to benefit them.

“It’s it’s pretty intuitive and it’s something that all Americans have to get off the sidelines and get involved in. They have a chance a week from Tuesday to elect, reelect Senator Warnock and then our legislative session start in January. So it’s really important that everyone is getting involved in this issue and showing lawmakers they want them to stand on the side of safety,” Watts argued.

“And very quickly. Just comment on, there is this kind of learned helplessness that I think happens among a lot of voters. I mean, you think about Uvalde County, where this massacre happened, about these fourth graders. They voted to reelect the current governor, Greg Abbott, by nearly 22%. The turnout, 45%. Fewer than half of people bothered to vote and they could have gotten themselves a governor who would have done something about it. That’s learned helplessness, Shannon,” Reid added.

“It absolutely is. I think cynicism is an excuse too often for inaction. We have to have hope in those states where we worked hard, you know, Michigan and Minnesota and Pennsylvania, we have flip chambers of the General Assembly and now we’re going to pass stronger gun laws,” Watts replied, adding, “We can do that everywhere if we work together to pass stronger gun laws than to vote on the side of gun safety.”

Watch the full clip above via MSNBC

Have a tip we should know? tips@mediaite.com