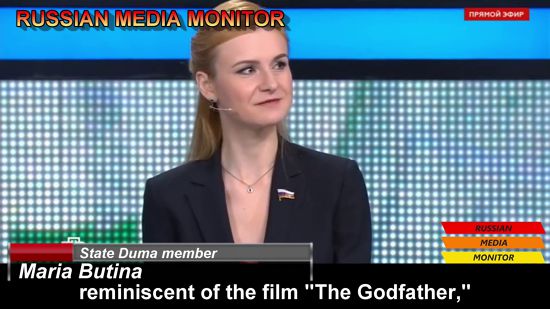 A reminder that Maria Butina was sent back to Russia after she was arrested by the FBI and convicted of charges brought by the Department of Justice (without Bill Barr’s knowledge). She was supposed to serve 18 months, but only did 5, and the Trump administration sent her back to Russia, for nothing. No prisoner exchange. The rumor was that her knowledge of the inner workings of the NRA and the Republican Party was just too embarrassing and filled with revelations for them to hold her as she was threatening to spill the beans. In 2021 she became a member of the State Duma.

“The fact that Russia pushed through the exchange of Bout, whom America fundamentally did not want to give away for many years, right now means that, like in The Godfather, we ‘made them an offer that cannot be refused,’” Butina opined on the Telegram messaging app Thursday.

“This is a position of strength, comrades,” she added.

Butina, a former student at American University, is best known for attempting to infiltrate prominent conservative groups, including the National Rifle Association, as part of a Kremlin-backed influence campaign ahead of the 2016 presidential election.

She served a 15-month stint in US prison after pleading guilty to conspiracy charges and was released in 2019. She then returned to Russia, where she became a member of the State Duma in 2021.

Convicted Russian operative Maria Butina appeared on Russian TV to assert that it was Russia’s decision that Brittney Griner was exchanged for Viktor Bout (as opposed to Paul Whelan), describing it as “an offer that can’t be refused” & boasting about Russia’s “position of power.” pic.twitter.com/MndPiCGP8N

And the spy seen with some of her pals.

Get Home Bag for Urban Environments(Best EDC Bag I ever had)
What’s the future of conservative America and the GOP?
Our Voice: Like a Nightmare From Which You Cannot Awaken
Mass shooters celebrate while Republicans vow to protect us from — wait for it — librarians and history teachers
Grip It And Rip It: AR Charging Handle Buyer’s Guide