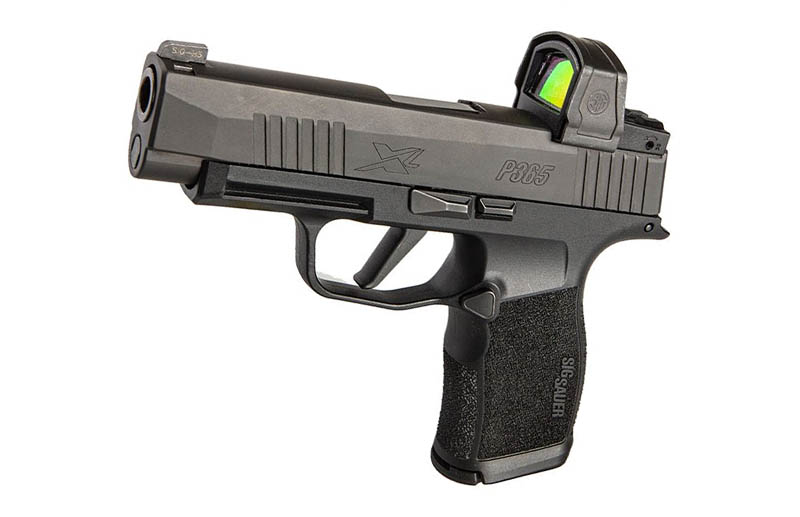 Do you still carry a handgun with iron sights? It may be time to get with the now, so here’s a look at some of the best pistol red dots on the market.

Red dot sights are becoming the default optic for almost every weapon platform. They already are for rifles and shotguns, but now they’re even becoming the standard for handguns. Red dots are better than iron sights in most regards, modern ones are more than durable enough to be relied on and even the most affordable models are starting to get pretty decent. Since you probably already have one for your carbine, why not consider a pistol red dot too?

Red dot sights are an electronic version of an earlier optic called a reflex sight. These use a collimator to project the image of a reticle onto a lens using ambient light. The user sees the reticle, free (or mostly free) of parallax out to infinity.

The first electric version was the Giese Electric Gunsight released in 1947, but it failed to gain much traction.

The first reflex sights for pistols emerged in the 1970s, with early examples like the Weaver Qwik-Point and Thompson Insta-Sight optics, which used a beam-splitting fiber optic to project ambient light as a dot reticle.

Early Aimpoints found some adoption in Open class IPSC (and later USPSA) competition, with notable adopters like Jerry Barnhart and Doug Koenig scoring overwhelming victories in the ’80s and ’90s.

Military units began experimenting with Aimpoint optics in the late 1980s and early 1990s as well, with one notable early adopter being the U.S. Army’s Delta Force.

Modern miniature red dot sights arrived at the end of the 20th century with the Docter (Noblex) miniature optic. Like a lot of first-gen tech, it was less than perfect, but the next serious take on the concept was the Trijicon RMR (Rugged Miniaturized Reflex sight) in 2009. The modern iterations of this sight remain an industry standard to this day.

Until recently, mounting an optic on a pistol (except for certain handguns designed for it like the Thompson Contender) required a gunsmith to machine the frame or slide to mount some sort of rail to it.

A “footprint” is essentially a series of holes that have to be tapped into the slide, some threaded and some not, to accommodate both mounting bolts as well as holes for lugs on the bottom of the optic.

The optic goes onto the slide, the lugs go into the holes, and then the optic is bolted in place.

Trijicon devised its own footprint—the RMR footprint—and some others have emerged as well. Before pistols came optics-ready from the factory, you had to send your slide in to have it milled for the footprint of the optic you intended to mount.

Eventually, some smart folks figured out you could instead mill the slide for an adapter plate. This allows the user to use whatever optic they want so long as there’s an adapter plate that exists for it.

Today, optics-ready pistols are offered for most new handguns from most major manufacturers. Some are milled with a specific footprint—such as the Shield RMSc footprint, common on compact and subcompact pistols—while others are milled for an adapter plate.

Pistol red dots are often differentiated by being either closed- or open-emitter designs. Open-emitter red dots, such as the Trijicon RMR for instance, have the emitter on top of the optic body, projecting the image onto the panes of glass. Closed emitter red dots house the emitter internally and better protect it from the environment.

Open-emitter sights are usually more cost-effective, but the emitter is theoretically more susceptible to damage or being interfered with. How likely that is to happen in the real world depends a lot on you and your situation.

Several other features differentiate pistol red dot sights from one another such as shake-awake/motion-sensing activation, brightness settings and solar panels, but not every person will necessarily find them relevant. Again, depending on how the red dot-equipped pistol is intended to be used, some features may be more useful than others.

Why Put A Red Dot On A Pistol?

The human eye is not designed for iron sights. We can accommodate—meaning switch focus from one object to another—but we can’t focus on multiple objects at once.

When you shoot with iron sights, you’re aligning three objects (front sight, rear sight and target) when your eye can literally only focus on one. Red dot sights cut it down to two.

Put dot on target area, press trigger. It’s a simpler and more biologically congruent sighting system than iron sights. If scopes are better for shooting rifles, so are red dots, and it turns out that they work pretty well on pistols too.

The notion of why you’d want to make shooting your concealed carry gun or duty gun easier while increasing your hit probability speaks for itself.

That is why Carry Optics divisions of the shooting sports are already some of the most packed divisions of IDPA and USPSA and why more police departments are switching to optics-equipped pistols as well. Even the M17, the U.S. Army’s new sidearm, now comes optics-ready. The concept just makes too much sense.

The first is the expense. While there exist some very affordable optics that are more than sufficient for most shooters, it’s still an additional expense on top of the gun.

The second problem is what you do if the optic fails. If the battery dies, your sight dies. Irons don’t need batteries.

Then you have the learning curve, as a pistol optic demands a consistent presentation with the dot in the window and will require sufficient practice to use effectively.

Then you have added bulk, which is certainly a consideration with a concealed carry gun.

That all said, modern pistol red dots from quality manufacturers are often very durable, have exceptional battery lives and some even come with integrated backup iron sights. Ultimately, it’s up to you whether you think it’s worth it to make the switch, but if you do, here are some excellent models to consider.

The Holosun 509T has emerged as a class leader for closed-emitter pistol optics. Features include their EOTech-style reticle (32-MOA circle, 2-MOA center dot) shake-awake circuitry, a solar panel and a side-load battery that lasts up to 50,000 hours.

It can be a tad tricky to conceal a pistol wearing one, but far from impossible. MSRP is a bit stiff at $505.87, but that will be money well spent.

The Trijicon RMR Type 2 is one of the most proven pistol optics on the market. At one point, it was the only tenable choice. You can choose a 1-MOA, 3.25-MOA or 6-MOA reticle.

It has an auto-dimming feature and shake-awake technology to conserve battery life, a stress-relieved housing to minimize the chance of breakage if dropped and it can be had with or without a fiber-optic solar feature.

The only serious drawbacks are a bottom-loading battery and cost, as MSRP starts around $700.

The Sig Romeo Zero is designed with compact to subcompact pistols in mind (with a 24mm lens) as well as being a solid budget-friendly option. It’s available with a 3-MOA dot or a 2-MOA/32-MOA circle/dot reticle.

The Romeo Zero Elite is made at Sig’s factory in Oregon and comes with a steel housing shroud for extra drop protection. Battery life is up to 20,000 hours, and it is compatible with the Shield RMSc and Glock MOS footprints.

MSRP is $203 for the 3-MOA dot and $220 for the circle/dot reticle. A slightly larger version called the Romeo Zero Pro is also available.

The Holosun 407k series is one of the most highly regarded carry pistol red dots. It has a shake-awake feature, a side-loading battery, an integrated rear sight notch and uses a modified RMSc footprint that may or may not require an adapter plate.

The 407k X2 has a 6-MOA dot and a battery life of up to 50,000 hours. Everything you need, nothing you don’t, and can be easily found for right around $200. You could spend a little less on a different optic…but why would you?

The Sig Sauer Romeo2 uses a modular housing that lets the user configure it as an open-emitter or closed-emitter optic by attaching a shroud and rear lens/emitter cover. The Romeo2 is available with a 3-MOA dot, 6-MOA dot or a bullseye-style circle/dot reticle.

It also has Sig’s MOTAC (shake-awake), a side-loading battery, a battery life of (estimated) 25,000 hours and it uses the Delta Point Pro footprint. About the only drawback is its stiff MSRP of $768.99.